So What Are These Projects? 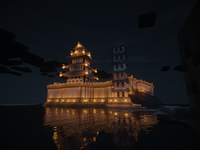 The Temple of The Sun

Main article: Temple of the Sun

Temple of the Sun.

thesprazzzler has taken to mapping parts of the server in Inkscape. So far he has mapped Three Biomes Divide (map), San Freedonia (map), and the entirety of the Freedonia Railway System (map), with the help of

And Some Picture of the Projects/Builds