The opposite of Standing. 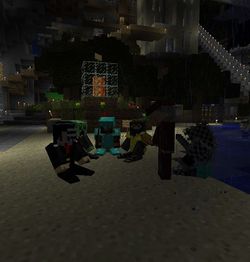 A sitting party at spawn.

Sitting is a feature on MinecraftOnline, added on 9 September 2011. It is possible to sit anywhere, but it is especially easy to sit on "chairs" and "sofas".

Notice: breaking blocks while sitting will always make them break on the first attempt. While it does take longer to break while sitting, it completely bypasses block lag!

It is common to see Minecraft "chairs" created by placing a stair block, with signs on either side for the armrests. Similarly sofas or benches are made the same way, only wider. It is possible to sit on these simply by right-clicking on them with an empty hand. You can get up by right-clicking them again, or by using the commands below.

It is also possible to sit anywhere, using the /sit command. You can get up again by crouching or /stand.