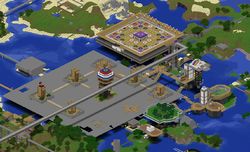 One day while building a so far unfinished castle outside of KrissLegion, the young man named

Enjoku decided to travel out and explore more of Freedonia. On his travels he came across a beautiful harbor almost completely untouched by human hands, with only a strange grey box building to mar its glory. And that was when he decided, for some unknown reason, to build a gigantic cobblestone platform supported by nine pylons to completely cover the harbor. However, what should have been un ungainly blight upon the landscape suddenly became a marvel of human engineering.

First to be built were nine enormous pylons that would serve as the base for the city to be. Each pylon is 7 by 7 blocks thick, and 15 blocks high. The inner workings of each pylon is known only to Enjoku and a few others....as well as anyone who simply walks inside one. From these pylons spread the vast expanse of the structure, a cobblestone platform 1 block in height, but an uncountable number in length and width. (Current estimate is at 250 wide and long). Atop each pylon was then constructed a tower. Each tower (soon to be numbered) has its own unique flag standing atop its height. The central tower, known as Tower 5, is the highest and most extraordinary. It took several days to construct this unique building. At the top of Tower 5 is a beautiful dome built from a variety of colored fabrics.

The main platform of Rig City is still under construction even after 3 weeks of difficult labor (mostly since Enjoku was ignorant of the Advanced Bridge craftbook feature until the middle of the third week). Enjoku is often heard requesting the help of other travelers to aid in finishing the city.

If anyone were to approach Tower 1 at ground level they would quickly see the small cluster of dirty wooden hovels on stilts around its base. This poorly lit sector of RigCity is Sector 1, just a small portion of the slums soon to be built underneath the platform. Anyone traveling through Sector 1 will almost instantly be assaulted by a variety of horrid monsters, including skeletons, zombies, spiders, and creepers. The slums are a terrible place to bring your family, but the poorer elements of Freedonia simply cannot afford to buy housing on top of the platform.

A very simple wooden dock connects the first two sectors, but the difference between them is obvious. Sector 2 is for the adventuring outdoor type of Freedonian. Housing here consists of fairly elegant stone and wooden structures, most of which are several stories in height. The decorative wooden path passing through the sector provides easy passage to and from Rig City. The paths and houses are gently yet well lit by many lamp posts and torch lights.

Also in this sector are 3 spawners, set to chicken, cow, and pig. This provides the local settlers with easy food for thier homes. A young good looking (according to himself) Freedonian lad named

tophergz aided Enjoku in constructing a special cobblestone generator which provides an infinite supply of construction material. Another man named

Running above the other side of Sector 2 is a skybridge built by some unknown Freedonian in the distant past. The skybridge looked completely ridiculous to Enjoku, so he gained permission to build what else but pylons under the bridge. This new addition gave a much more realistic feel to the bridge. The bridge itself runs all the way from Rig City to KrissLegion many hundreds of blocks away.

Over a single 3 day weekend Enjoku had the sudden inspiration to build a Pigchinko Stadium right beside Rig City. He began by building, you guessed it, a pylon. This pylon holds up the entire arena almost by itself (two smaller pylons were added for aesthetics at a later time). Around the Stadium's base is a large dock lit up by many lamps and torches. Two lifts await to take eager players or spectators up to the second platform.

Ekim6 offered his services. This was a blessing from

SlowRiot himself. With Ekim's help the Stadium was made in just two days, with extra additions added on the third.

The Rig City Pigchinko Stadium is unique to others, as it has special black colored pits which instantly grant a contestant victory. However these pits are the furthest and smallest of all.

Recently the Pigchinko Stadium was upgraded by administrator Krenath. He was aided in this effort of course by Enjoku and a few other players: TranceGirl, Ekim6, jimmyd93, and moderator Tank_AUT. The new additions include expanded size, new stands, larger color-pits and an advanced redstone circuit maze underneath the stadium platform. Enjoku is still building the dock and entrance areas at the bottom of the platform for future Pigchinko Tournaments.

When a recently demoted moderator named

SavageClown returned to Freedonia after a long furlough, he was allowed to build a small house close to Rig City's borders. During a conversation with Enjoku, Savage offered to build a spleef arena for the city. Enjoku quickly thought to himself "pffft" and headed toward the other side of the city to build it by himself.

Three hollow pits now rise from Rig City Harbor, each of different size and shape. At the bottom of these pits are great pools of lava which can incinerate all that fall into the depths. These pits are the brand new Rig City Spleef Arena. Although most of the structure is still unfinished.

Rig City's harbor contains a great number of small and tall islands. A large portion of the harbor is cloaked in shadow by the platform, but what can be seen away from this shadow is truly a sight to behold.

Recently it has been discovered by Enjoku and friendly moderator Kiatarie that there is a gigantic system of caverns directly beneath Rig City. The caverns are described as continuing forever into the distance, or as Kia was quoted as saying "Sweet fuck this just keeps going!"

The Warp Tower is the newest addition to RigCity so far. It is a tall wool, cobble, wooden, and glass structure. At the top is a small room which will hopefully hold the warp location when the time comes. There is a double iron door keeping warpers from exiting the room, since the doors are protected by a password that only Enjoku knows, and he will give it to those he trusts. This warp tower is designed to keep griefers out of the main city, as the only other entrance to RigCity is by the rail line. And few griefers are patient enough to take the minecart for such a distance.

Still to be founded, the park platform will hold a beautiful manmade nature park with waterfalls dropping back into the harbor.

GodlyCheeze, the objective in Rainbow Warrior is crush your opponent to death. Each player starts off on a different side of the rainbow. After the countdown, each player must quickly press the buttons above their rival opponent to try and crush them with pistons and slowly dwindle their health. The player still left standing wins! More to come later

The most populated area so far, Sector 3 has all the major attractions for tourists and the most civilian homes at the time. Several plots of land on the water are being created to house any future settlers of RigCity.