Three Biomes Divide is a snow-bound settlement that serves as a trading post in the remote wilderness. 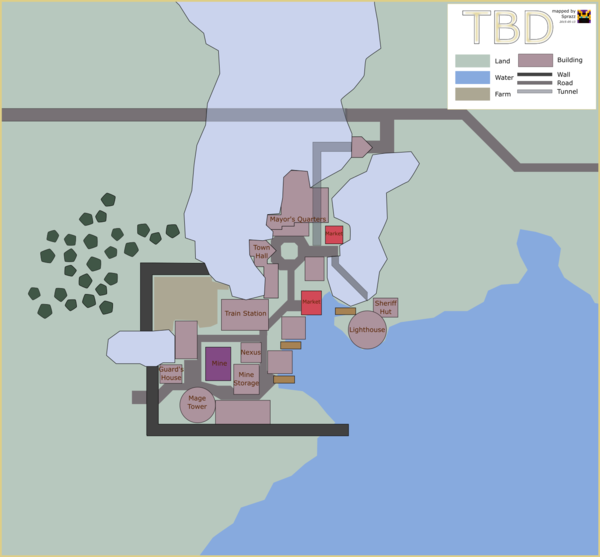 The Story of Three Biomes Divide

The story begins with the Divisors, a long withstanding clan of hunter-gatherers and miners, easily recognisable by the single gold star on their shields and armour, as a coat of arms. Driven out of the Kyrzistan land by a Kyrzian force led by

Reseres, the nomad clan found themselves with a treacherous journey ahead, across seas, over mountains and through jungle. Their plight eventually landed themselves in a huge snowy biome, akin to the bleak, white plains that their elders had once tilled and hunted. Feeling at home once again after the traumatic events of the Kyrzian cleansing policy, instigated by the ruthless senate in Kyrza, the Divisors finally saw the chance to start anew. Eager to harness the newfound power and efficiency from the recent revolution of agrarian techniques, the Divisors saw it most profitable to settle down in a prosperous establishment.

Three Biomes Divide quickly grew into one of the fast expanding trade and mining cities of the region, although this expansion may not have been a good thing. The proletariat that had formed out of the population growth in such a city began to revolt, and measures were taken by the Jarl of the city,

Smudja. Using a system of long-disused tunnels, the radical movement made a number of raids and pillages on town stocks, controlled by the Jarl. To control this mass movement of the peasants, led by the radical

theschlozmeister, farms on the outer edge of Three Biomes Divide were pillaged and set alight, in an attempt to coerce the population into line with the Jarl. Evidence of these tired, decrepit establishments can still be seen today beyond the current walls of the city.

theschlozmeister was captured, eventually agreeing to contribute to the future of Three Biomes Divide. Following the months of unrest, the Jarl decided to lay the foundations of an aforementioned city wall, in order to control the movement of his people, and to impose tariffs on the imports the city was taking. Following this reactionary policy,

Smudja carried out a number of social reforms over the next few years, in an attempt to gain consent amongst the majority. Despite this, numerous minor flashpoints of dissent led to the town's excommunication from the Nexus system, a secret organisation with influence across all of Freedonia. A huge infrastructure and architecture project was commissioned by the Jarl, and carried out by the great Divisorian architect of the day,

thesprazzzler. This is how the city of Three Biomes Divide became what it is today.

Three Biomes Divide has become a centre for trade in the region, especially in the dealing of minerals and raw materials. Its vast spruce forests that surrounds the city provides a good supply of timber, and the extensive mining tunnels and tracks have helped to increase productivity and output. In recent times, with the thawing of the ice in the bay that Three Biomes Divide is nestled by, fishing has been allowed to make a comeback, as popular with the Divisorian ancestors of Kyrza.

The Jarl of Three Biomes Divide relies on his bureaucracy to keep the city in order. This consists of himself, the High Architect,

thesprazzzler, and his now reformed ally, the Grand Protector,

theschlozmeister. Their unified influence on the city has had a huge effect on the development of the region. There are currently no opposition parties in the central governing offices, though there are rumours of an underground movement, lurking in the disused tunnels beneath the city once again...

Three Biomes Divide is connected via boat route, which can be found at the end of the pier at the Cretian Resort in Skyline.

The Three Biomes Divide Zephyr Rail Line runs from Skyline. The station is situated in the town centre, and provides rail links to the Nexus system and the map expansion.