Who is this Guy?

ardoom1. Regularly running about Spawn, Skyline, and New Venice whilst looking for n00bs to mess with. Lives in Skyline, the warp that he manages. Nowadays funds most of

tayo_bag with wood and cobble. Business partner with 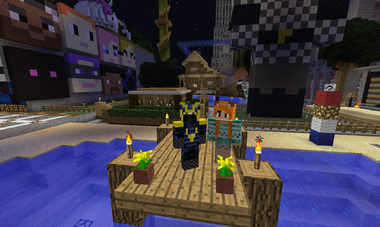 theschlozmeister's builds have been in partnership with

thesprazzzler, since they corresponded every day at school on what they would like to build. Many days, when orchestra had been cancelled,

theschlozmeister would totter over to

crystalriver's house, since, understandably, there is not much else to do whilst waiting for a bus. Back on to the point, he has built a thing or two in his career on MCO, some builds being more noticeable than others:

thesprazzzler originally built the design in creative, with him directing the build from the start.

TEllins was then paid to finish off the wall, because the other two were lazy. Recently, Sagi no Shiro featured in the daily map find on the MCO Facebook page, in which it got 270+ likes and many comments. A success, to say the least.

A medieval town in the cold wilderness with a story behind it. Built with

theschlozmeister has built other stuff too, not just this measly list you see here, although he probably can't remember what or wants it to be kept less well known. See if you can find anything built by him on your way round Freedonia.

theschlozmeister became a moderator on the 22/02/14 at 13:00 GMT. Immediately, he accidentally released the coords of the then Mod Vault

much to the amusement of