Skyline is a town situated on the edge of the largest snow biome of the original disc of Freedonia, founded by

jayceetee and currently managed by 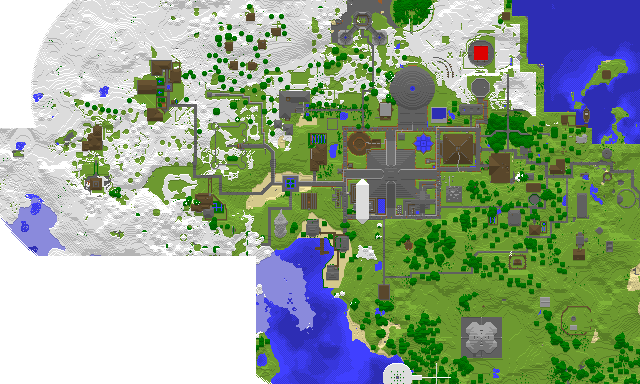 Skyline was first created as a settlement for

jayceetee and all his IRL friends. It expanded rapidly, with over ten players residing in the town eventually. In August 2012,

TomWithAGun, started to push for a warp for Skyline, but when

SlowRiot visited, he commented on his lack of town infrastructure.

jayceetee was annoyed, so he asked

Machines_Are_Us to dig a hole to create a custom train link for Skyline to Newlands. When jay and schloz dug up to see where they were, they realized that they now had a 2000m tunnel that lead in the opposite direction to Newlands! Eventually though, a link with the Freedonia Railway System from spawn was finished, along with the self dug line direct to Newlands, owned by

TomWithAGun. Sadly, after this series of events, Skyline lay as ghost town for 5 months, with

theschlozmeister occupying its grounds, holding the title of Protectorate of Skyline, while

jayceetee was absent. Oh, and

After the first big surge in building and the push towards a warp (which it did not achieve), Skyline lay fallow for 5 months with only

theschlozmeister occupying its grounds, as players such as

jayceetee had recently given up or had been banned, like

TEllins around the town, with the intention of setting up a new Room 101 for her or a new house. Rather Suddenly, she decided to pledge her time in the now ghost-town in the hope that a warp might be obtained. The outcome remains to be seen.

thesprazzzler has also promised his building services and support of the project. Also,

theschlozmeister have been building a Mall to bring new customers and players into the town, adding essential town infrastructure that

SlowRiot said was lacking the last time he visited. Also, some guy called

ardoom1 has jumped on the bandwagon and has helped around the place.

Please ask for building permission from

ardoom1. They will grant you a space of land and some free stuff. Good quality and creative building is always appreciated so that we could soon attain a warp. If you build without permissions and your building is not judged by the management to be of a quality we encourage in Skyline, then you will have a month to improve the quality of the build. There is a train line from Newlands to Skyline, and a station on the Occidental Line from spawn, please ask for more details.

To reach Skyline via the Nexus connection, follow these directions: