On March 10th, 2011, Freedonian citizens around the world looked up in wonder as a blazing comet left a blinding orange streak across the night sky. If the tales are to be believed, mere moments later a large egg smashed into the ground, leaving a large crater in an unidentified farmer's field of wheat. As the smoke dissipated, a figure surrounded by a faintly glowing orange aura arose from the shards and spoke in a godlike voice: 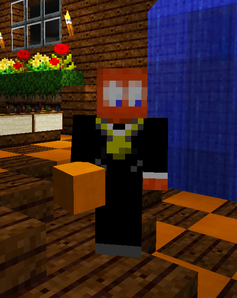 One of the many Shypixels dotted around Freedonia

ShyPixel is an old fogey with a ridiculously orange head. Seriously, this guy is old. So old that it's kinda creepy that he is here playing games with a bunch of kids. Somebody should call Chris Hansen...

He is known mainly for being the Shypixel. He is the purveyor of ShyPixel Bakeries, Freedonia's leading chain of stale, moldy bread vendors. He also manages (poorly) Shypixel Farms, a collection of resource gathering monstrosities that are largely a pox on the landscape.

Before ascending to adminship, ShyPixel was easily the most forgiving mod on the server, so much so that the other mods frequently wondered why he was even a mod at all.

Despite this apparent lack of ban-ambition, Shypixel is the wielder of the server's 1337th ban. He was promised a shrine, but for a long stretch of time was bitterly disappointed. AgentMuu rectified this by finally completing the Isle of Muu's Shypixel statue, arguably the flashiest/most dynamic of the entire collection (and also the most naked).

Shypixel voluntarily retired as admin on 21 July 2012, citing personal reasons. Ever the kind-hearted fellow, Shy left on entirely amicable terms and has pledged to continue lurking in IRC. His Shyheads are still being discovered hidden in Freedonia's crust to this day.

In his Own Words

Shypixel is proud to celebrate woman's day every year:

He isn't one to waste time on minecraft

and he is warmhearted and gentle to all living things.

Shypixel is definitely not a hippie.

Shypixel is a charter member of FoCU, which he felt embodied his playing principles. He never did get around to furnishing the Fellowship HQ, the Giant Cake.