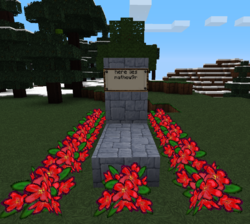 Mathew9R was no ordinary person. He had the go-getter attitude needed to become a big player anywhere he went. Backed up with his infinite knowledge of computers, video games, and anything else you don't know, he was an unstoppable force. On top of that, Mathew had a secret power nobody anticipated: a horrendously annoying personality. When Mathew cast his wide gaze on the small land of Freedonia, he knew they didn't stand a chance to resist him.

Mathew got the hang of the server on the very first day, and took an active stance against griefing, stealing, and anyone else being the center of attention. Mathew realized that Freedonia needed another moderator, and therefore took it upon himself to call out anything and everything he took offense to. On good days, Mathew's messages would take up a good half of the public chat window.

One entity Mathew disliked in particular was the dreadfully handsome bastard

Charlesbaechler. He saw Charles as a cheeky snod who used his donor powers to abuse the scum beneath him. Valiantly, Mathew called Charles out; telling him to remove /heal from his hotkey as it was unfair. Unfortunately, Charles' reaction to this was less than agreeable to Mathew. In the dead of night, Charles used his keen perception to scout out Mathew's /sethome on the map and stuck a blade through him. Charles, unsatisfied, did it again the next day and this time raided his chests for precious cargo. Mathew, furious, was determined to best Charles. Mathew thought about how to counter Charles, and determined that the best solution was to move his base, but not his /sethome so that Charles could not find it. When Mathew brought this fact up to Charles, he also mentioned that he still had a few stacks of iron ingots left and that Charles had therefore "lost, faggot!". Shamefaced, Charles admitted defeat and cried while surrounded by his newly acquired stacks of obsidian, gold, iron, and diamond.

Feeling satisfied, Mathew slowly reacquired wealth and felt it necessary to participate in Project Angel. His assistance in the project brought him closer to his dearest friends and allies on the server,

SlowRiot. His healthy relationship with them paid off when Charles, angry after his last great defeat, stalked Mathew to his new home and pushed him off a high platform to his death. Mathew, more furious than one could imagine, talked to Slowriot, who agreed to move Mathew's entire house across a vast expanse of land to somewhere more isolated from the rest of the world ("I'd be happy to copypasta his shit out to the bumhole of the universe if it means we never have to hear his whining again" ~SlowRiot), forcing Charles to carry out an annoying journey in order to reach him.

Nevertheless, the threat of Charles still loomed over his head as the bastard continued making death threats to him via the public chat window. However, Mathew cleverly employed his secret weapon, threatening to annoy Slowriot and Runechan, and attempting to engineer Charles' banishment for bullying.

Charles, still bitter over the annoyance Mathew had caused him, devised a trap made out of TNT and cobblestone at Mathew's residence. Unfortunately, one of Mathew's strengths - his overwhelming sense of self-importance - was also a biting weakness. Mathew, believing himself to be above the law of griefing, destroyed a section of Charles' cobblestone trap in order to render it useless. Unfortunately, Mathew's abandon of server policy was not overlooked, was banned for griefing and his belongings dumped at spawn, nearly causing a riot to erupt amongst the filthy, grubbing masses that gathered. Charles, experiencing this as a bittersweet moment, felt that Mathew deserved something to remember him by and therefore transformed his trap into a grave for Mathew.

Despite Mathew's overshadowing presence in Freedonia, his creations are few and sparse. His home was built dangerously close to the Isle of Muu, a fact only brought to

AgentMuu's attention after Mathew's banishment, leading to the submission of appropriate zoning documents to pave over the area and erect a strip mall. His grave will remain, but within viewing distance of a McDonald's sign.