"If banning were sex, writing on the minecraftonline wiki is like my post-coital cigarette" -AgentMuu

"Agentmuu is a pretty cool guy, he has +71 reputation and doesn't afraid of griefers" -

AgentMuu - also known simply as "Muu," "Muuster" or "Muuderino," if you're not into the whole brevity thing - is a former admin who enjoys a particular level of infamy as the founder of the Isle of Muu, which for many years housed the lone End portal in Freedonia. Having worn many hats over his illustrious career, Muu stepped down from his admin post on 15/3/13, roughly two years after his first day on the server.

AgentMuu is known for random, explosive fits of capslock shouting (usually condensed to a single "HAI" to avoid proximity damage and authoritative hypocrisy) and unpredictable eruptions of volatile merriment. Approach him and his personal space with caution - while not unstable, he is unpredictable. Muu usually tries his best to slip in unnoticed when he logs on, lest he be besieged by the peanut gallery; use /msg to greet him, if you want to get on his good side!

Complimenting him on his monocle also works.

The Isle of Muu 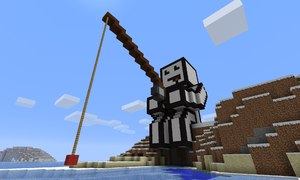 The reclusive AgentMuu resides on the Isle of Muu, which observant players can locate on the LiveMap by spotting his statue, icefishing with that usual doggoned grin on his face. An ongoing project, the Isle houses expressive statues of past and present MinecraftOnline admins -

bastetfurry to name just a few. AgentMuu has his work cut out for him after the most recent wave of admin promotions. The Isle of Muu is surrounded by large lava pillars to mark the territorial boundaries.

Flippeh statues, organized into a museum with multi-level viewing. Lately, the museum has lost track of the numerous other Flippeh statues built by other industrious players, but management is reaching out to all Freedonians for assistance in completing the collection. 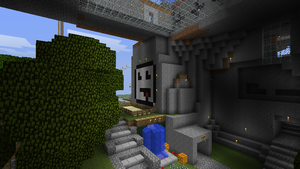 AgentMuu once gave being evil a shot, but found he couldn't keep up with the likes of BadSyntax and Charlesbaechler and lapsed into fits of power-hungry, overdramatic speechmaking. On those rare occasions the actual

EvilAgentMuu logs on, under no circumstances should his ego be fed or his attempts at mischief be acknowledged.

Once a humble, colorful room with just enough space for everything necessary, Muu's base has become a shell of its former self. Shortly after going mad (but shortly before becoming admin) he began stripping out everything in his compound, every last redstone wire and brick block, obsessed with covering his home in an unthinkably massive shell of lapis and iron. Only recently has he finished his even more obsessive task of outfitting every corner of the shell with redstone-activated glowstone lighting.

There is an advertisement of AgentMuu's face at Spawn, behind the Visitor Centre. Right click his tongue with an empty hand for a fun, family-friendly surprise!