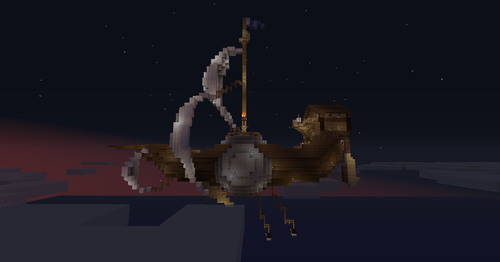 werdnaz was bored. Minecraft had updated to 1.3.2, and the server was awaiting Canary's update to be completed. The memories of terrorising griefers were swiftly fading, and he was running out of reasons as to why he shouldn't be working on his maze.
Luckily, inspiration struck when he wondered if anyone had ever built one of the skyships from the Edge Chronicles books in minecraft. He googled it, and discovered that people had, and that they were all shit (Not to mention the shocking quality of "ships" that litter the oceans of Freedonia). Even for someone as lazy as werdnaz, he thought it would be an interesting side project, that would serve as a suitable procrastination exercise from doing all the important things he needed to do.
He built a prototype ship in singleplayer in 1.3, so he had access to the coloured wood slabs and stairs, with those in IRC offering constructive criticism.

Once he was happy with the singleplayer build, he headed to his island in the western ocean, which lies along the Lothendhal Boat Route. Construction took place over a few days, though the ship was built fairly rapidly when werdnaz wasn't procrastinating. Lack of coloured slabs in 1.2 meant a brief pause in building, but the server soon updated, and construction could be completed. 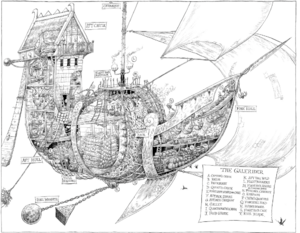 Cross section of a skyship

Windrunner is primarily based off a picture by Chris Riddell of a cross-section of the Galerider, a sky ship from the Edge Chronicles. The ship was constructed according to the sketch, with certain modifications made to make up for restrictions in space due to the walls in Minecraft being a metre thick, and for the variations in scale in the sketch.

Windrunner was built without any donor commands - this meant noob poling up from the sea below, and constructing a scaffold underneath the ship. She was built just above the default cloud layer, 128, so that the keel sat in the clouds.


The flight rock is the main anchor point for the build. It was built first, to help make building the hull easier, and to provide a place to store resources. werdnaz slice the singeplayer ship in two, so it was easier to see and construct the hull of the ship. He built one of the sides, and simply mirrored it on the other side, so he had the empty shell of a skyship. Once this was complete, he added the interior walls and decking for the lower half of the ship, before adding the wheelhouse and quarterdeck.


The sails were the hardest part of the ship to construct. He spent a long time in singleplayer attempting to make them have the illusion of movement, though eventually got something he was fairly happy with. There are three sails, of which the larger side sail was the hardest to build, and to get looking natural. Angled curves in Minecraft are hard :(

The ship stays mostly true to the interior of Galerider, with a crew sleeping area and storage in the forehull, with a larger hold in the afthull, carrying valuable cargo from Mycelia.
At deck level of the wheelhouse is the galley, with a small storeroom underneath, and access to the secure large hold. On the first level of the wheelhouse is the infirmary and the quartermaster's cabin, accessed from deck level by an outer ladder. The captain's cabin is at the very top of the wheelhouse, directly behind the helm, where the flight levers and wheel can be found.