"Not much is known about this enigmatic settlement at present." -

xanderstrike mostly during an 11-month drug induced rage and then gradually expanded on over the next 10 years. It is Xander's largest contribution to the server, and was largely constructed with no outside help.

Xandronia contains over 50 automated or semi-automated farms for dozens of types of items ranging from Cobblestone all the way up to multi-item craftables. All farms in Xandronia are free to use by all at any time.

The farms are spread across two main locations, the main house and the workshop.

The Main House is primarily a showcase of hidden action/subtle craftbook generators that I find visually appealing.

Directly to the right as you exit the Nexus, you'll first come across the cobblestone fountain, the latest and greatest iteration of my cobble generator design.

As you continue, the front garden has spawner powered meat, leather, eggs and wool. To the right you'll find birch, bonemeal, sugarcane, cocoa, and bread.

In the right turret you'll find a large Cactus generator, in the left you'll find early iterations of oak and skeleton generators no longer working.

After entering through the double doors, just to the left you'll find a comprehensive collection of MCO map art, including most pieces from the Map Art of MCO article plus a few extras.

If you go all the way back and to the right, you may find one of the first cobblestone generators on the server! If the TPS is high enough it might even work for you.

The workshops is a little tricky to get to, but it's worth it. To reach it, turn right out of the Nexus and then right again through the big red Guest House, out the door in the back, and follow the torches. Be careful, there are lots of long falls with no guardrails in the workshop.

It's the main scratch area for building so things change often, but as of writing you can find the following items automatically generated there:

All this in an area of less than 100x100. If you find a denser collection of generators I'd love to see it.

Most of the generators at the Main House have prototypes or larger versions at the workshop with the circuitry visible, so if you'd like to copy one for yourself this is the place to do it. 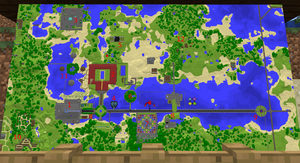 The large red wool house. Xander's first build after godhood. Most of the first floor rooms were given to other gods or admins who were active at the time it was constructed, but many of the upstairs rooms are available. If you'd like to decorate one send a message when Xander's ingame.

On the way to the workshop, to your right you'll see a large statue of Xanderstrike, riding a minecart holding a Lapis block. Before becoming a God, rail was Xander's primary mode of transportation.

Built survival using a homemade sphere generator as an experiment in designing natural landscapes. Most of the natural looking landscape around Xandronia has been heavily modified if not made from scratch.

One of the earliest 3rd party Pigchinko arenas on the server, built under the direction of ShyPixel, recently retrofitted to modern Pigchinko standards by The Jackal 249.

The path level and cliffside dwellings are experiments in brutalism. The cliffside one has great views of the Pigchinko arena.

Xander's first build in this area, built completely survival without donor commands. Due to a miscalculation the dirt sphere ran up against the Beta height limit of 127, so it was left half finished and filled with trees that collided with the height limit.

The forests around Xandronia are a build! Almost every tree and quite a lot of the landscape has been extensively terraformed. Beginners who accidentally build in the forest have their builds removed (but are well compensated). Anything within the circle of X beacons is owned!

A nearby settlement that heavily encroached on landscape built by Xanderstrike, but was beautiful enough he allowed it to stick around. He now maintains it for its inactive owners. Follow the signs directly across the road from the Nexus for a nature trail to Hobbiton.