"Where there is violence, there is a jackal!" -

MattyQ
"Jackal is ill because he has to play minecraft every 15 minutes or he dies." -

Jackal is a Admin, the Grand Marshal Sergeant at Arms of Pigchinko, A founder of the Brotherhood of the Beacon, and a member of FoBh and Jackal-Corp.
Some have said that he is losing his mind, others say he already has.
Put simply he spends much of his free time here. (some would say too much) 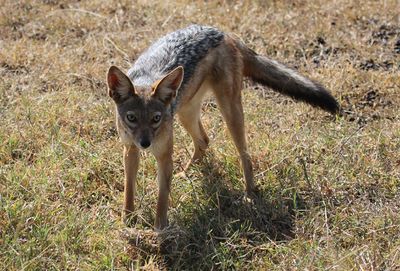 A Jackal in its natural environment (taken by Sprazz in Kenya).

Many hundreds of years ago The Society Of The Jackals, seeing their end, created 250 clones named The_Jackal_1 to The_Jackal_250 and sent them out to try and re-establish their society, however the enemies of The Jackals sought the clones out and killed all but two of them (only 249 and 250 remain) thanks to the lousy abilities of their cloned guards, the lazy-arse dogs (of which there were 540, all of extremely low caliber). Being the elder clone 249 has set himself the task of finding 250 and insuring his safe protection. He is rumoured to be in hiding somewhere on the unexplored lands of Freedonia.
*Note* This is most likely all bullshit.

The story so far

June 21st 2011:
The 249th Jackal clone joins MCO on a laggy computer and then doesn't leave cause he likes it.

July 2011:
While doing nothing in his house, Jackal was asked by

minecraftfc if he wanted to join a small town called Emucraft. Jackal said yes and got tped there by a Mod. Jackal was accused of grief by one of the owners of Emucraft,

muthemu (now banned). The accusation did not stick, but Jackal decided to take a break from MCO. When he returned in 1.7.3, he quickly set up a piston door shop in emucraft, which had been taken over by

kylekrat's banning, Jackal decided to leave Emucraft and set about trying to find a new place to live.

jimmyd93 advertised that he needed help to build the Jimmyville hotel. Jackal decided to assist, and, after receiving his payment, Jackal asked

jimmyd93 if he could live there. He was told he could, and so he began building his house.

September 2011:
Jackal soon got bored of living in towns and left Jimmyville to find a new home. After hours of wandering around he eventually found a place to live, 2433m from EastAustania and set up a house there. He has since decided to start a town and is currently adding the finishing touches to MountJackal.

October 2011:
Nothing much happened here.

November 2011:
Jackal sets up Jackal-Corp, and begins to build its HQ. Jackal also begins to notice a number of his close friends being modded.

December 2011:
Jackal again becomes tired of life in towns and sets out to find a place to build a new house in the new 1.0 areas of the server map.

26th Dec.: Jackal comes on to be greeted by

SlowRiot, who then makes him a moderator, along with

shypixel grants Jackal the position of Grand Marshal Sergeant at Arms of Pigchinko. The first person in the history of pigchinko to be awarded such a prestigious position.

June 21st 2012:
Jackal celebrates his 1st year on the server, along with

nosefish, with a game of pigchinko!

Sometime in 2013...:
Jackal was made an admin, and stopped caring to update this wiki page :P.

Promotion To Grand Marshal Sergeant at Arms of Pigchinko