From MinecraftOnline
(Redirected from Donor)
Jump to navigation Jump to search

/colourarmour will create a full set of leather armour, just like /kit leatherarmour. It will only be available to donors who also have Wood Kit, which gives that command.

There are four "sets" of colours available with /colourarmor. To see which values are valid for your account, you can just do "/colourarmour invalid_value" and it will return the values that you can use.

Most of these dates are based on the wiki's page history; as such, some of these events may have happened earlier, with the wiki update following at a later date. 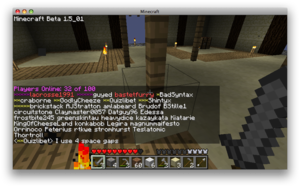 Each kit level allows the donor to obtain a kit of tools or armour of the specified material once every two hours. It also comes with special donor commands.

Players who purchased these kits prior to the close of the old donation system in 2018 have a "Legacy Donor" tag when you hover over their names in chat.

These legacy kits are no longer obtainable via donating, but players can use tokens to obtain the same kits using Store. Kits purchased via tokens are displayed separately from legacy donation kit levels but confer identical privileges.