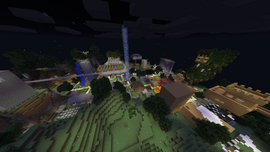 HellFireForge from above, at night

HellFireForge is a town, a warp, a rail station, start of the road to the Temple Of Supreme Fishiness, home of the managers of the PSPA and Andreaslag's Mansion.

In general, this town is filled with old 2011-2012ish buildings. Getting around this town is, and will be, hard. The organization of buildings in this town is very low, and there aren't really any roads to help you. The town hall is small and very old. If you want to visit this town do it only to experience the 2011 building style or to build among them. The only good sights are

RuneChan's cottage, the PSPA building, the road to the Temple Of Supreme Fishiness and

On late May to early June 2016, a number of chests in HellFireForge were filled completely with stacks upon stacks of Spruce Logs. The origin of these logs is unknown, since there are a number of spruce farms in Freedonia capable of producing such a massive quantity of wood.

Andreaslag, called Andreaslag's Mansion. It was originally a small house built in April 2021, with a small excavation in the mountain. In February 2022, he decided to excavate the mountain which was generated in 2010 and build a stunning mansion on it. The mansion is built with stone, cobblestone, planks and glass to resemble the oldschool, 2011-ish style around the old buildings. The mansion and its floors look a bit weird and unorganized; this is to make it look like an art piece. The mansion's plan was to have 3 floors; Andreaslag decided to make an expansion to 6 floors, but it ended up 7 floors with an accessible roof. He isn't sure what to do with the mansion, since only 5% of it is actually used.