This Chinese style temple is dedicated to the worship of the Fishy Gods. To get there, follow the pilgrim's path from HellFireForge, which starts right out of town in the forest and is marked with yellow flowers.

The path of flowers

A pilgrim of the Fishy Gods needs only some sticks to make a ceremonial fishing rod and cook fish to please Their noses, and a block of wool, which They will probably provide along the way in form of wild sheep. You might also want to bring a weapon, armor, and food, in case night falls before you arrive.

To get to the starting point, look at the map below and follow the instructions. 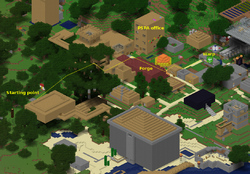 During your pilgrimage, you will witness some of the wonders of the Fishy Gods. Pray to Them or don't, they couldn't care less. Most of the time, They are lazy bastards and don't give a shit about Their believers. That's why They gave us the Holy Words representing Their divine powers, so that we can make divine wonders in Their name. They love the smell of cooking fish and loathe that of unwashed feet.

It's forbidden for a reason. Don't go in without

nosefish (or /heal and /jumpto, but that is considered cheating). The Fishy Gods will smite you.

Take the path on the right up the hill instead, which will lead you to the

House of the Fishy Gods

House of the Fishy Gods

When you arrive, all you will see is a lava pit, some floating windows, and a long row of signs explaining this wonder. Read them, follow the instructions, and marvel at Their wisdom. Trust Them, it's completely safe.

Just a tiny pavilion with some snow around it. Doesn't seem to be a mini snow biome as nosefish had expected when he built it. Bummer. Nice view, though.

Descending from Snow Pavilion, the tranquil pool lies on a small plateau on the hillside. Read the signs, pray the prayers (hint: walk around the fountain), and see the wonders that Their Holy Words will perform for the believer. A word of warning: Do not step into the pool - They do not like that.

The Fishy Gods love Fish. Their smell and taste, to be precise. This is a good place to get some and have a rest before making your way through the

Walk slowly and pray for no lag and you will be fine.

Entrance to the temple

It was designed roughly after the Taoist "LüZu" temple in Beijing, but if you know Chinese temples, you will find many aspects to be slightly off, partly due to limitations in Minecraft (no red fences ⇒ no red pillars ⇒ planks instead of red wooden walls), partly on purpose to make things a bit more Fishy and fun. This is Freedonia after all, not China. 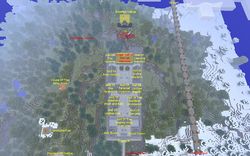 Map of the temple

"Iron ore? Slightly holy? Whatever you have taken, take less next time!" – That is what those that support this idea usually get to hear when discussing with other believers. But this is religion, and you can never be too careful, because offending Gods is bad for you. So just in case it turns out that those madmen were correct after all, we can point to this hall and say "See, we knew it all along!".

Hall Of nosefish's Work And Rest

nosefish home away from home.

Hall Of The Random Workbench

When the temple was built, there was a single workbench in the way that hadn't been there when the first measurements were taken. There was no admin online at the time when

nosefish started building, but luckily the workbench was placed just right to be on an altar in this hall. Now the pilgrims craft their ceremonial fishing rods here. In case they have forgotten to bring string, they can pray in the corner next to the workbench for some time, and the Fishy Gods will provide some.

Hall Of The False God

xanderstrike appeared out of thin air, gave him a diamond pick, explained how mob spawners work in Freedonia, and left. The spawner was subsequently used in the Hall Of Resurrection. This hall holds a shrine to

xanderstrike. The true believers never go in there.

Pray for material wealth if you must, but don't be too greedy.

The fishy Gods love the smell of fish, but not that of feet. Pray where the signs tell you to, and They will help you clean them.

Not even Death can scare the true believer. The pilgrim should put their belongings in a chest, put a block of wool above, and wait for nightfall. At night, sleep in one of the beds. Then enter the Chamber Of Resurrection, have Faith, and do not be afraid.

The Divine Warmth of the Fishy Gods will be with you, wherever you may go. Just be careful not to offend Them (They don't seem to like sneaky people, for example), or Their Warmth might become just a bit too intense.

Hall Of The Favorite

As you might have noticed during your pilgrimage, They really like cacti. In this hall, the pilgrim may pray and receive a piece of the Holy Cactus, to protect their house from all evil.

For some reason, the secret of making brooms was lost hundreds of years ago. When people still knew how to make them, the janitor stored them in here. He was a pious man, which should be a good thing for someone working at a temple, but got him into some serious trouble when one day a rather silly prayer of his was answered by Them — go and see for yourself!

For the true believers, this is the holiest place in the world. For everyone else, it's just weird house with a yellow roof and strange furnishing. The Pilgrimage of the Fishy Gods ends with a visit to this place. The Pilgrim may fish in the Holy Pond and give offerings to the Fishy Gods to receive Their blessing. Swimming in the Holy Pond is strictly forbidden, and They will smite anyone who attempts it.

Surroundings of the Temple

Not all of the temple's surroundings are highly valued

Out of business since /kit fish arrived.

Find out what happened to the janitor after his little accident.

nosefish made the floating nosefish to make the place more visible and at the same time explain his user name. Being really bad at drawing, he has been drawing nothing but nosefish when bored at school, university, and in meetings.

The Nosefish statue was made by

nosefish modelling for the first time in his life. The light on the hard hat turns on at night. There is a way inside and to the top from the back.

Connects the temple with nosefish's first home and some other destinations:

You do not need a ticket, but have to bring your own minecart.

The temple is connected to the Great Circle boat route, which goes all around central Freedonia, taking you to places like Ocean City, Glenfiddich, and Casa de Austria.

If you don't want to ride all that far, the Temple of the Heavenly Liquorice is right across the bay.