"im going to start goodrepping people who are afk, and stealing their cookie" -

The reputation system is a way of anonymously rewarding good deeds, and punishing bad ones, that all players can use at MinecraftOnline.

Currently reputation does not affect any major aspect of gameplay directly; it is simply a means of socially tracking public feeling about an individual player.

The primary purpose of the system is to allow players to reward others whom they find helpful, and punish bullies.

A top ten chart of most popular players by reputation can be found on the website control panel. The bottom ten players are also located there, showing some of the most controversial players.

A player's moderator-viewable card also contains reputation data, and this may be taken into account when deciding the results of ban appeals, and whether a player is generally to be considered trustworthy. 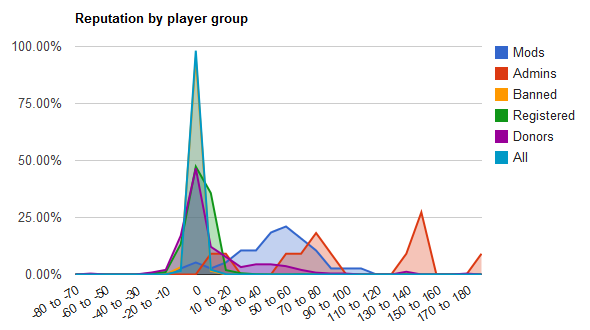 When a player is given good reputation by another, they are given a cookie.

When a player is given bad reputation, that player loses a heart.

While unlikely to make a notable difference to gameplay, this element adds a more visceral depth to the experience of receiving rep. If ten players give negative reputation within a close space to a given player, or if that player is already low on health, it is even possible for the ill-reputed player to die as a result.

You can give/take and view who you have given/taken reputation from via the user control panel on the MCO website. These features are located under the reputation tab.