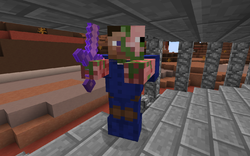 Your friendly neighborhood Officer Steve is on the case.

Acsidol: "Hey Slow, you know what would be awesome? If like ten Steves jumped out and murdered anybody who started a fight."

SlowRiot: "That sounds like a bad idea but I think I'm drunk enough to pull it off."

samoroth: by the way sometimes when i die 6 of me spawn y is that?

In the light of many murders in Freedonia, Steve was called upon to discourage would-be assassins. Whenever a player kills another player, 10 zombie-pigmen mobs, one riding a cave spider. If the player killed had played for less than ten hours, the killer may get a wither effect.

The steve police were added early in the timeline of Freedonia, and was discontinued in 2011 before being brought back in March 2015 with the availability of new mob spawning technology.

Added by a drunken

SlowRiot on a whim one evening. When a player killed another in PVP combat, ten Steve mobs (non-player characters with no name tags and the default skin) spawned at the site of the kill, and usually proceeded to attack the attacking player.

If a moderator or admin killed another player in PVP, the steve police did usually not arrive on the scene. The mechanism behind this was rather messy, and also coded by a drunken SlowRiot on a different occasion.

As of 23 June 2011, one member of the Steve Police was promoted to Mounted Police. When a PVP death occured, nine ordinary steve police would turn up, led by a tenth steve riding a spider. Or attempting to ride it. His success was not guaranteed.

"Now you can be wanted by Steves with Style." -

This added a hilarious police outfit to everyone's favorite feature of the Freedonia Server, the Steve Police. Although no longer a feasible modification, the steve skin is archived at [1] (The file has been removed from that page and the link needs to be removed or updated (Please remove this part when finished).

The original Steve Police was discounted after the Steve mob was removed by Notch in beta 1.8.

A revamped and more advanced version of the Steve Police was brought back in March 2015, mainly under the direction of

Five zombie pigmen with "Steve" heads and blue coloured leather armour, and the nametag "Officer Steve" spawn at the location of death. They are not initially aggressive, but if provoked they will retaliate swiftly and bloodily. They are armed with an enchanted wooden sword with Knockback III and Sharpness III, move slightly faster than ordinary pig zombies, and do not drop any loot or experience on death.

The choice of pig zombies was made due to the appropriateness of the classic comparison between the police and pigs.

When killed by a member of the Steve Police, the death message on IRC reads "<playername> got in trouble with the law."

The spider riding steve police officer was added back into the group, though the officer is smaller than most and riding an equally small cave spider.

In the 1.12.2 update, there was a feature added to the game that allowed for admins to create player avatars that had no AI and could wear player skins. After some tweaking and changes to the Policeman plugin, the new and improved Steve Police was born. Rather than a whole squad spawning when a player was killed, only one will do so now and he appears as Steve wearing a snappy blue police uniform. Like his predecessors, he carries an enchanted wooden sword that deals plenty of knockback and also a special new item called a warrant, with the base item being a paper. It will say "This is a warrant for the arrest of <playername>" with the killer's name on it. There is a small chance that the Policeman will drop it on death.