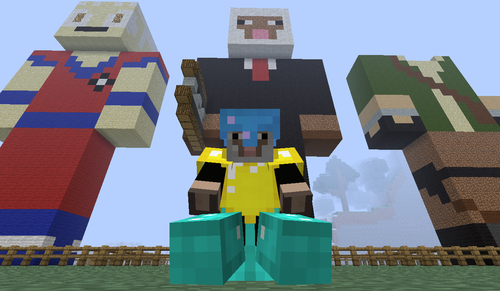 Sheep1997 all kitted out in Statue Park

Sheep is a sheep, who likes to build and commit shenanigans with his other half,

Aussie_sheep. He can be found building or mindlessly walking about. Furthermore, Sheep enjoys to talk about himself in the third person and give himself compliments like, "You're pretty cool Sheep>". Sheep is a creative and fun fellow to be around, who is always ready to lend a hand.
If one word was used to describe Sheep, it would most likely, without a doubt, unequivocally, with no hesitation, without a second thought, undoubtedly it would be: Sheep.

Sheep came to Freedonia with his good friend

mrmad888 (Who has now abandoned the server after a near ban incident).
They together came onto the server in search of a new place to live after their old server was disbanded. They liked the quietness of the server, and they got to know friends and neighbours who lived close by. Though, after some time had passed, both players drifted away from the server due to a lack of interest and motivation. He finally returned to the server in February of 2012 with

Aussie_sheep. Aussie_sheep with Sheep, helped expand StatuePark as Aussie supervised all the buildings going in, and sheep was the main personal statue maker. After some time building sturctures on the own, the two went off together and started working on Kangaroo Islands together. Mrmad returned after his long hiatus and helped construct some of the islands houses, but soon left the server again after a near ban incident. Aussie went of a started to create his own town, while sheep lingered at his own. Sheep on his own accord abandoned the town in search of a new one. Aussie joined him, and the town started to build. Together they have slowly built OvisAries, and continue to do so till this day.

He has made official statues at StatuePark for several people including:

He no longer creates statues for people

The Sheep society was fun, but now it's a shit stain on society.

Creating OvisAries. And/or walking without purpose. Furthermore, he has started a build at Forrrest, which now consumes a lot of his time

Sitting is the new planking: