The city as seen from the town hall tower

View north-west from the bridge 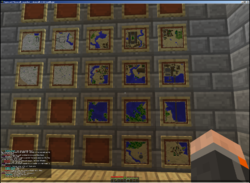 Avalon is a large city uniquely identifiable by its unified architectural style, namely that of naturally-occurring NPC villages. It is composed of three natural NPC villages, with a great deal of growth and expansion surrounding and joining the original settlements. 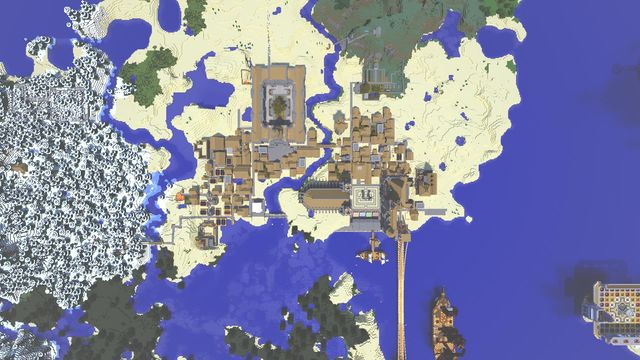 Bird's eye view of the northern half of the city

Krenath found another village in close vicinity, across the river. Unbeknownst to both of them,

SlowRiot had previously discovered a third wild village to the south across the bay, and had begun to construct his Minaret in its vicinity.

Once it became apparent that several players had discovered this natural treasure trove independently, they set about cooperating to expand the villages to make them even more impressive. It was decided initially to stick to a strict NPC-style architecture, and many of the buildings first added were in fact near copies of existing NPC building styles.

As the city grew, larger improvised buildings began to appear, maintaining the NPC style choice in terms of materials, but exhibiting greater creativity in form. A diverse Gothic architectural scheme evolved, combining elements of French and German Gothic architectures, and notable for making heavy use of stair blocks (including in the then-new upside-down configuration) and half-blocks to produce more subtle curves and gradients than would have otherwise been possible.

The gallery below shows the incremental progress of the city since the construction of the central plaza.

The city is located in the north-east regions uncovered by the third border expansion.

The region is remarkable for its geological variety; one of every biome is available nearby. Like most NPC villages, the city itself is situated amidst desert. Jungles are reachable across the desert to the south, a frozen pine forest is across the second river to the west, mountains are visible to the north, barren steppes and plains are a short hike to the north-west, and the bay gives boat access to the vast expanses of ocean punctuated by occasional islands reachable to the east and north-east.

A short boat ride to the north reveals an ancient jungle island amongst the overgrowth of which can be seen a Mayan Step Pyramid.

One of the first major buildings added to the city, this stone-brick-walled castle was initially the main keep for the western village. It features a courtyard, animal pens, and defensive fortifications looking west and south.

Originally the main keep for the north-east of the three villages, this castle is larger than the western outpost, and appears to be constructed in a Norse style. Another strongly defensive building, it houses a catapult in its courtyard, and marks the old north-east border of the city.

Linking the north-east and southern villages, this ambitious bridge spans 160m of the bay, and offers efficient trade route access between these originally disconnected settlements. A suspension bridge, its wooden deck is supported by iron chains connected to thick cables.

This French Gothic styled cathedral is roughly patterned after the Notre Dame in Paris. The building features two stepped rectilinear tower, flying buttresses, a carved facade and elaborate interior. There is a crypt below the main space which can be accessed via the base of the towers, an ossuary, catacombs, and passages joining to the deep chasms running underground beneath the city.

The city hall, or Rathaus, is a neo-Gothic building patterned after the Rathaus Sankt Johann in Saarbrucken, Germany. The interior contains a ballroom, reception area, library, the Mayor's offices, storage rooms and balconies overlooking the central square suitable for giving public speeches. The larger rooms of the interior feature ornamental chandeliers. The basement, or Ratskeller, is an arched area with elaborately carved ceilings, and houses the city's treasury. The central tower of this building, which can be ascended by a series of increasingly narrow staircases, is the tallest building in the city and affords views across all of the surrounding landscape on a clear day. However, the crenellations are tall and the windows of the tower are small, so a better view for tourists may be afforded from the towers of the Notchre Dame across the plaza.

Inspired by William Playfair's Old College building in Edinburgh, part of Edinburgh University of which

SlowRiot is an alumnus. A rectilinear building with quadrilateral symmetry housing a central courtyard, side wings connect the north and south main buildings. The entrance is via the south, and the south building has a short tower capped with a dome. Shallowly sloped rooves, rusticated pilasters, regular rectangular windows and decorative entablatures mark out the specific architectural style of Playfair's design, differing from but accompanying the neogothic of the other larger buildings in Avalon.

A single large tree grows in the courtyard, symbolising the tree of knowledge.

The interior houses the Playfair Library, modelled on the same in the real-life building, and paying homage to the original architect. The east wing houses stacked lecture theatres in the somewhat anachronistic Bauhaus style, several minimal tutorial rooms and a science laboratory.

This sturdy windmill grinds away day and night in the western village to make bread for rich and poor alike throughout the city of Avalon and its outlying villages.

Crossing the western bridge, following a long and winding path that is easily obscured by snow through the frozen forest to the west, one may come across a logger's hut in the wilderness. Here a traveller may rest, and perhaps come across some of the logger's poetry.