"Life is like a box of chocolates, you never know what you're gonna get." - Forrrest Gump

Forrrest is a heavily forested settlement with some dramatic cliffs that was started in 2015. It is a piece of reclaimed land that was formerly ocean; as such it has some unusual terrain features, including a number of ocean biome mineshafts incident upon the surface. It is the second newest warp, and was thought to be the last, due to admins favoring the creation of Nexus links over warps, until Farm was created in 2021. The nexus link for Forrrest is in Snaketown.

It is notable for the fact that commands are largely disabled within the area, encouraging traditional travel even for donors. This can make visiting the location hazardous, and exiting safely is non-trivial as the /home command is also disabled outside of the arrival box.

This is a free-build location, where anyone is welcome to come and stake out a patch as long as they don't modify anything anyone else has already built. All natural trees are available for felling, as long as it is for clearing land for a build. 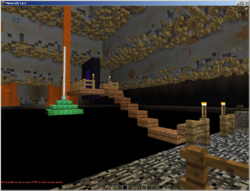 A nether portal beneath the surface

There are some interesting underground features beneath the central mountains which visitors are encouraged to explore; however, care is advised since leaving the area may prove difficult if one does not have a pick with which to leave the underground zones.

Forrrest is not a farm. Due to the name showing up in /warplist, it appears to noobs as a place to farm wood. This has led to essentially the entirety of the Forrrest being trashed. Grief runs rampant in the Forrrest. The landscape's reputation of being trashed by noobs and the nearby Snaketown's reputation of being griefed by the EPU has led to the region earning the nickname 'The hood of MCO.' Anyways, please do not use the Forrrest as a place to farm wood.

"Forrrest is a shithole" - Many people, many times.

It's clearly visible that Forrrest has gone from a dense and desolate forest to an active bush community, to finally evolve into a population center that sprouts new cities and happenings. Forrrest, as the westernmost outpost of Freedonia, houses a lot of active players, while also being a nice landscape and place with many secrets...

A long, phallic shaped build with contributions from

Violet_Apathy. Because every warp needs their first dong!

A small tree hut made by Anna next to

xArches' dome. It has a small tunnel system under it that player can use to get around Forrrest easily.

Cpt_Waterbubble's town floating above the northeast point of Forrrest. Be careful not to fall!

snakyman founded Snaketown, which started at the southwest point of Forrrest, and has grown to conquer the western islands and oceans of Forrrest as well. Snaketown and Forrrest are known as "the ghetto of MCO" due to Snaketown's grief issues and Forrrest's reputation of being trashed. It is currently the most populated area near Forrrest.

A tree hut complex near the central area of Forrrest.

Forrrest has recently become the home of many cities, and a hub for FRS rails and FRC roads. It is the lifeline that allowed cities like Snaketown and Numington Town to flourish. In turn, these cities and their road connections allowed for the creation of other cities, such as Lemonaid Town (sadly), Socorro, Trexlergrad, and more to exist. The region's nexus at Snaketown also allows for a link to several other cities in the 1.12 expansion area northwest of the landscape.