Port Dhal in an early stage. 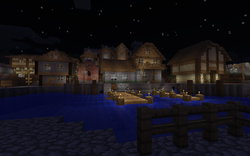 The town at night months later, with many more buildings.

The waterfront seen at night.

The railway station at night.

View over the waterfront.

The fortress and town as seen from the church tower.

Map view at an early stage of progress (4 May 11), before construction of the farms and manors. 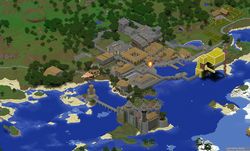 Port Dhal before being built.

Port Dhal is a little port town at a former edge of civilization. The closest warp is Caverns.

The settlement is especially notable for its extreme attention to detail. 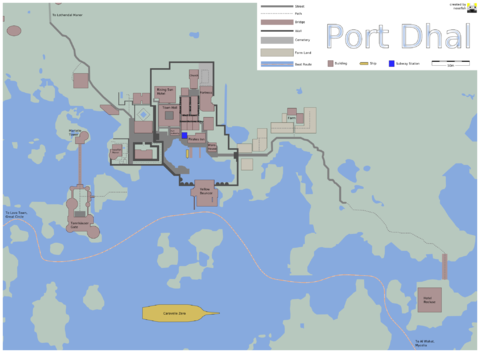 Map of the town.

Having been just a little dock on a lonely beach for a while Port Dhal grew fast as soon as it got connected to Lothendal Manor via railway. Simultaneously a great statue was erected to watch over the port entrance. 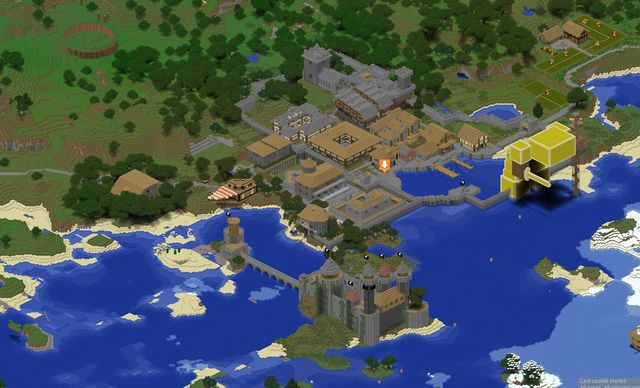 Map overview of Port Dhal as of 24 Nov 11. The farms are visible in the top right, Tannhäuser Gate is visible lower right, and Martello Tower across the bridge to it guarding the waters to the left. The recently built Northern Quarter is shown with its expansion wall, to the left of the original harbour.

Whilst the Pirates Inn clearly is the most important building, the town will have all infrastructure to host its growing population. The mindful visitor will see an increasing number of details such as the sewers and the graveyard.

The local railway station is connected to a railway system, connecting Lava Town, The Isle of Muu, Lothendal Manor and Port Dhal with an intelligent ticket based guidance system. It is connected to the wider Freedonia Railway System, and can be reached from Spawn, by changing at Lava Town. 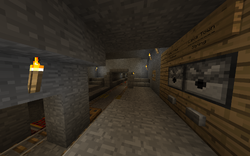 Inside the subway station

Port Dhal is a harbour on the Lothendal Boat Route, marked with orange and white buoys. Seasoned seafarers can reach all of central Freedonia, as well as Al Wahat and even Mycelia from here. 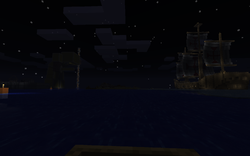 Arriving by boat at night

The road connects Port Dhal with Lothendal Manor and the Caverns warp on one side, and Hotel Recluse on the other.

The Yellow Bouncer statue guards the entrance to the port.

The statue can be made to vomit water down upon passing boats, with the flick of a lever located by the outflow of a sewer drain in front of the Inn.

Right outside the walls, beyond the South gate, the food for the town is produced. There is a farmstead and a barn, a well, extensive fields, and grazing land for cattle.

Some of Port Dhal's residents have become rich through sea trade and are building mansions in a new qarter of the town. Initial expansion begun by

Lothendal constructing some mansions himself and subsequently inviting

nosefish to build there, starting a trend of some of Freedonia's wealthier recluses setting up home in the new district at the North end of the town. In little time, four more manor houses were erected in the newly built villa quarter.

The name is reminiscent of Manchester's Northern Quarter, an area reputed for its bohemian, artistically creative and intellectually stimulating atmosphere. Also referred to as the Villa Quarter or the New Town.

Construction here is notable for its use of newer materials which were not previously available to the historical builders of Port Dhal - most notably stone brick. New developments in gardening are also visible in the trendy new quarter; planted hedges and vines are seen prominently.

Expansion of the wall

Occupying an area initially outside the safety of the Old City Wall, the new area beings with it a new wall of sturdier stone brick, however maintaining the rough crenellated style of the Old Wall, and expanding the area of the town considerably. However, the wall only bounds the town to the west (seaward-facing) side, serving a primarily decorative purpose. The majority of the new manors are built outside the protection of the wall, indicating that the town has entered a new era of peace and prosperity where medieval defences are no longer considered necessary, and can give way to aesthetic idealisations.

As a result of the expansion of the Northern Quarter, additional builders and architects were commissioned to create a fortress on the island to the North-West of the town, and a watch tower on the smaller island in the bay to the North.

The buildings are named Tannhauser Gate and Martello Tower respectively; there is more information on the Tannhäuser Gate wiki page.

Incredible attention to detail appears to be the author's hallmark, and it is demonstrated in many elaborate and carefully designed parts that are easy to overlook at a casual glance. This is a town that can take a great deal of time to explore in full.

Amongst other details, the town features a fully working sewer system. Every latrine in the town is provided with running water, and working drainage. Any items dropped down the toilets will make their way through the sewers and eventually exit into the harbour. Drain grates are also placed along streets to aid drainage.

One of the less obvious details - at the rear wall of the town, one of the older trees has broken through the wall and scattered several cobble blocks on the ground. 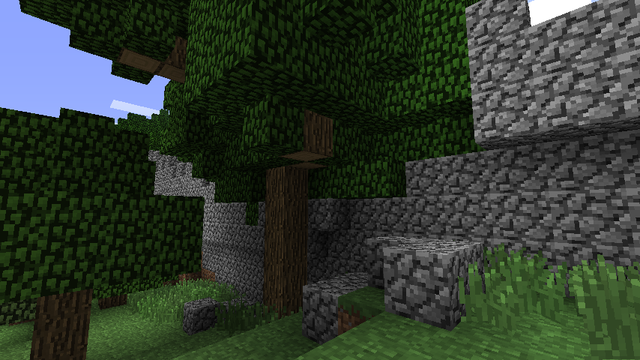 A dog is patiently waiting for the return of it's master. Boxes are piled on the quay, waiting to be picked up. Some boats are towed to the piers. 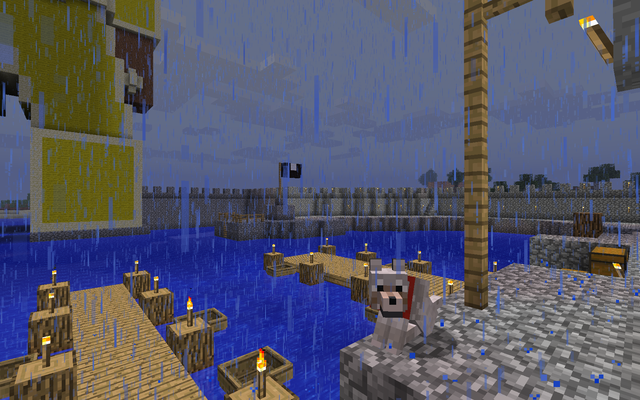