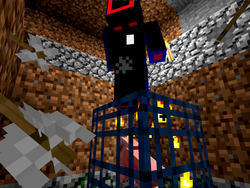 A player standing on top of a mob spawner.

When broken, spawners often leave visible flames floating where they were.

"It's a flaming pig in a cage, why is it spitting out chickens?" ~Anonymous

A mob spawner is a block that intermittently produces either monsters or animals when the lighting and surrounding conditions are appropriate. They are naturally found in dungeons.

Spawners can be found naturally occurring in dungeons.

Mob spawners in the MinecraftOnline server can be collected by hand, unlike in the vanilla server (where they don't drop an item when broken). Simply break them with a diamond pickaxe as usual.

Breaking spawners placed by other players counts as griefing, in the same way as any other player-placed block.

Alternatively, as with just about every other block, it can be purchased at shops if they stock it.

Once it has been placed, a spawner needs to be set to a specific monster type, using /setspawner <mob type>. A spawner type can also be changed at any time after placement with the same command.

The other mob types have been deemed too unfair to allow to be produced with spawners, as harvesting their drops would make certain challenging aspects of the game too easy.

This section is user added by --

bcMineOut and is NOT official guidance.

This information is not sanctioned or approved by the Admin team and is generated from user based understanding of best practices as of May 2019 for MC v1.7.10. This guidance is to be considered subject to change and ultimately the Admin team will act on spawners as they feel necessary, even if it's contrary to this guidance.

While no formal rules have been codified on this topic, there appears to be some general best practices that should keep your spawner/grinder from being deactivated.

The key point here is that all grinders should be built to prevent massive build-ups of mobs and not be designed around the player sitting AFK at them. If your farm/grinder is a lag risk it is likely to be disabled. Another idea would be adding a manual on/off switch so your grinder is off when you're not around as an extra safeguard.

But, that being said, grinders appear to be evaluated on a case by case basis and action on them is wholly at the discretion of the Admin team based on situational and other concerns they may have.

Players are welcome to ask an Admin to evaluate their spawner setup for any obvious concerns with the understanding that those concerns could change at a later date.

Additional note: Several staff were approached to provide guidance on this topic at the time of writing and they deferred as they were wary of setting up player expectations/commitments and other concerns as expressed above.