This page is for the original Pigchinko arena, the game and rules can be found at Pigchinko (Game)

shypixel. It is located in close proximity to Lava Town but has its own warp.

By rail, it can be reached from Spawn by taking the Lavatown line east, and disembarking at /st LavaTown. In 2011-2012 it has own station, but after reconstruction of the arena it was decommissioned.

By foot, one can reach the Pigchinko playing board by warping to the Caverns Warp, then following the road to Shypixel Farms and Fort Dax. Follow the road around the lava mountain to reach Pigchinko.

By Pigchinko warp from central node near Central Nexus. 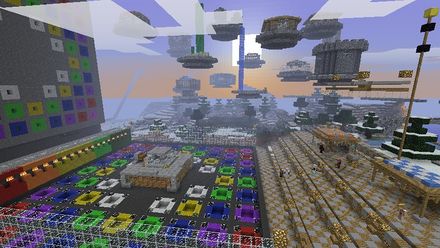 Initially, the Pigchinko arena featured a relatively simple outline, with coloured wool at the bottom of the scoring pits and little automation. Most notable was the redstone-driven timer with progress display at the back of the arena.

The arena and surrounding area was revamped considerably for the third event, with coloured wool surrounds for the scoring holes, a glass shield and a fence to reduce incidents of spectator ingress during gameplay, and a vast redstone-powered scoring board. The scoring pits were upgraded with note blocks, to play an appropriate note for each score. The colours of the notes given off by the note blocks are matched to the wool colour of the individual pits. At the same time, when scoring, the pit is illuminated on the display board using redstone-driven hellstone to make fire indicator lights.