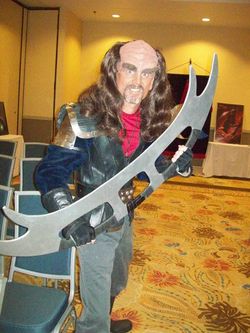 Krenath in his human costume

healthyuncle> i think krenath has oldest, but hes a boss
<

healthyuncle> what you just said was incredibly rude

Krenath> Sticks and stone may break my bones but my boot up your ass is really going to hurt.

Krenath>: BOOM, I SANK YOUR BATTLESHIP!

Sometimes found on Discord voice chat, Krenath was one of the more active admins is previous years, but has slacked off lately. Wise and very helpful he is a great person who has a no-nonsense attitude and put the server before all. He was a great contributor to the MCO community and revered by many.

Krenath attributed his promotions to not waiting to be promoted to get out and try to help players and improve the server to the best of his abilities with the resources he had available at the time. As a non-staff Diamond donor, he was helping players learn the server and was handing out extra tools and armor to needy players and already combing the public areas for signs of grief.

Once promoted to Moderator, Krenath all but quit building areas of his own and focused on grief checks and repairing griefer damage. He spent a lot of time trimming the griefer population and a mere two weeks into his moderatorship, ended up fending off a 4chan raid almost singlehandedly by staying awake, online, and banning for a 30-hour stretch. During this time, he had an epiphany about grief, griefers, and abandoned areas which led to his belief that abandoned areas should not be repaired by staff unless its original owner logs on to report the grief. This permits the building to erode the griefer population while the griefers in turn erode the building. Eventually both the griefers and the building go away and someone else can build on that spot.

The next time Krenath had to deal with a 4chan raid, he had already been promoted to admin. This made things a lot easier since he merely deputized all the regular players online at the time, made them invincible, gave them diamond swords, and suggested they stalk new players and kill those that were observed to grief. That raid didn't last very long and many regulars were disappointed they missed the fun.

Krenath has always believed that the server owner should run the games as he sees fit and those who cannot handle that should find a different server to play on rather than expect the server to change to suit them. As his point of view has changed over time, he found himself looking for something different in a server and, to follow his own advice, decided to leave MCO amicably rather than work against the server in any way.

Krenath likes to think of himself as tough but fair. If a player follows the rules and doesn't try to ruin the game for others, they don't have to worry about Krenath bothering them.

He doesn't tolerate griefers. When confronting a griefer who wishes to avoid a ban or or who wishes to successfully appeal an existing one, just saying the right words isn't enough. Krenath requires the player prove they know and understand MCO's rules and genuinely intend to follow them from now on.

If the player can't do that, they'll get their ban and/or their ban appeal will be denied.

Aside from being a game Admin, Krenath is also a Super God legacy donor. Krenath was also second player on the server to donate to God level and the first (and so far only) player to donate to Super God level. This rank was obtained back when it was possible to donate money in exchange for ingame ranks.

According to the server's rules, Donors are allowed to use all their donor powers in PvP combat, and staff are allowed to use for PvP only those powers that also exist as part of their Donor rank. Any powers a staff member has access to solely as a result of being staff are not permitted in PvP.

As a Super God donor, the vast majority of Krenath's in-game Admin powers are mirrored by his Donor rank, and thus allowable for PvP. This includes invulnerability, teleporting, teleporting others, the spawning of items, mobs, blocks, lightning, and even the use of WorldEdit along with a wide variety of other things.

As a result, Krenath rarely engages in PvP, and it's probably a good idea not to provoke him into it.

Krenath> If I were a verb, it would not be a pleasant action.