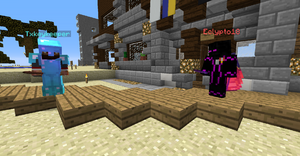 Eclypto18 was always interested in building, he started gathering wood for a base minutes after joining. Shortly after becoming a resident of Drocata Swamp, he decided that the current world of Freedonia was missing a communial meeting ground in the southern part of the map. Thus, he started to build his own town, which he thought is never going to get such a lot of attention. Three months after building the town, it was already gigantic and hit 50 residents. Eclypto has hosted several events for New Eden, two meme contests and two scavenger hunts. Aside from that, he has hosted a lot of large community projects. You can either find him roaming around the world on quests/raids or building up New Eden.

"Eclypto is just worth it" -

tyhdefu was a moderator when Eclypto18 first joined. He liked checking that Eclypto wasn't griefing. Eclypto kept not griefing. Tyhdefu didnt like that Eclypto had a build right next to his in dracota swamp, and it was almost as good as his. Luckily it never reached that level. Despite this, tyhdefu doesn't hate Eclypto too much.