On March 12th, 2022 New Eden officially closed its doors to the public. Players are still welcome to visit New Eden and explore it's many Easter eggs and builds, as well as use it's XP Grinders.

Special thanks to the community of McO for making New Eden their home, and for adding their own touches to the sprawling lands of the town. 27/5/19 - 12/3/22

Verico Post interview with one of the owners Eclypto18 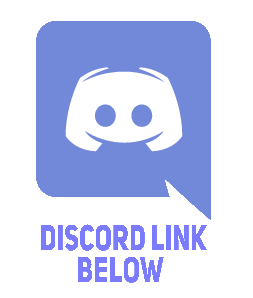 Welcome to the city of New Eden, famously and widely known on the server as a central hub for new and old players alike. A place built to be a communal area for players to hangout and play together. Located in the South-Western new lands of Freedonia, it was built on two large islands just north of Dracota Swamp, of which it has direct access to. The town was founded by

Eclypto18 on the 27th of May, 2019. Until its closure, a dedicated N.E. staff team continued to manage the town even when Eclypto was not present on the server, handling things such as recruitment and building projects. In fact, many of the residents of the town became Project Managers and added their own creative builds to the town. From the point when Eclypto first announced New Eden open to the public, the MCO Community helped and supported the constant rise and expansion of New Eden. If you were looking for a place in the great wide land of Freedonia to settle down and live in a united community of over a hundred players that work together to help each other to grow and thrive - New Eden may have just been the place for you. It did not matter if you were a new player or one who had been around for some time. 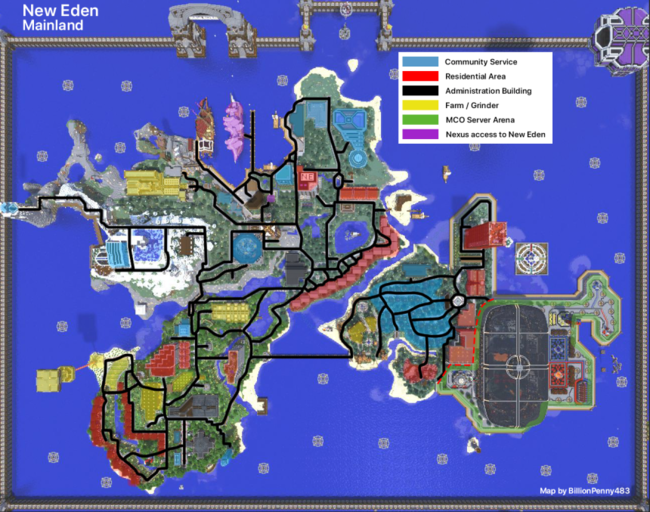 1. Nexus Link - Enter the main nexus hub through the Visitor Centre at spawn. Go onto the South Lime pad. Head to the third nexus pad which says "New Eden".
Stand on the warp pillar which also says the towns name. Welcome!
2. Nether Highway - Enter the nether portal to the right of the visitor center. Follow the signs up to the highway. Find the southern NHS. Observe the coords of New Eden on the wall signs. Follow the directions to a nether portal. Welcome!

Before New Eden closed down, you could ask any New Eden recruiter or the town owner if you want to join. To join the town, you would have to agree to sign a contract which confirms that you follow the rules of New Eden. Once you signed it, you could choose one of the housings, which are listed below, to own a room / house there. When you've chosen and paid for your housing, congratulations, you are now a proud resident of New Eden!

...Tell Eclypto18 or TheDemetri about your idea, they will give you permission to do so and find a place for the build if the idea is good enough. (Remember: Nobody else in the town except for Eclypto18 can give you perms to build projects!)

In order to join New Eden and use its facilities, you had to sign up to the town by becoming a resident. Residents/players who wished to build in the town had to become project managers. Unauthorized buildings inside N.E’s borders, or buildings in a close proximity to its borders in order to harm the towns growth resulted in the MCO staff team being alerted. Subsequently your build would either have been moved or you would have been appropriately punished.

Eclypto18 decided that the town would have a strict build code, in order to keep the towns cohesive style and neat set up, which would be enforced by set of rules which every MCO player must abide by within the confines of N.E.

TheDemetri have full perms to everything within the towns borders and will enforce the towns rules by making the appropriate actions to unfit builds or additions.

Five meme contests were hosted in the New Eden Discord server. Players were allowed to post memes in a channel of the Discord server and react to others' memes using a specific emoji. The player who got the most reactions with said emoji was declared the winner of the contest.

Winner of the first meme contest: 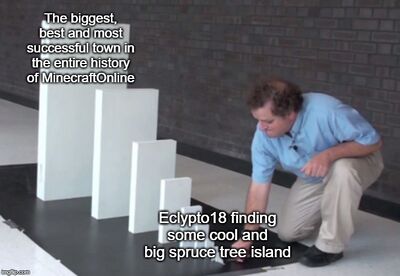 Winner of the second meme contest: Winner of the third meme contest: 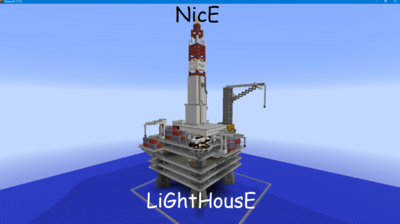 Winner of the fourth meme contest: Winner of the fifth meme contest:
No winner due to no memes being made ):

In the scavenger hunts, players had to find signs all over New Eden. Each one gave the players a clue where the next sign was. Each sign had a number on it, which they had to use to create a list of numbers. Anyone who finished their list correctly won.

TheDemetri after finding all 20 signs
First person to complete the second scavenger hunt:

Mr_Fudgy after finding all 50 signs

Aziroeth after finding all 50 easter eggs

Capture The Flag was a server-wide event hosted in the N.E Arena on MCO's 10th birthday.
Winner:
Red Team (

In TNT Runs, the ground below you dissapears permanently when you step on it. Eventually, when enough ground has dissapeared, players will fall down.
All round winners:

The quiz about New Eden was won by:

New Eden has a plot district for residents to build on. This is also where the Statue Contest was held.

The New Eden Metro was planned to be a commutal railway system, helping residents make their way around New Eden. New Eden's sheer size was proving difficult to get around quickly, and so the idea of an internal Metro was brought up on January 7th, 2021.
The project remained unfinished until the city's closure and is still in this state today. 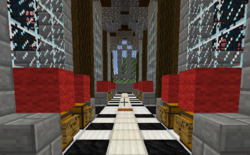 The Eden Reef is available to all NE residents and has a variety of grinders.

The New Eden Factory is free to use for all NE residents and contains many automatic farms.

Work Begins on the New Eden Arena by 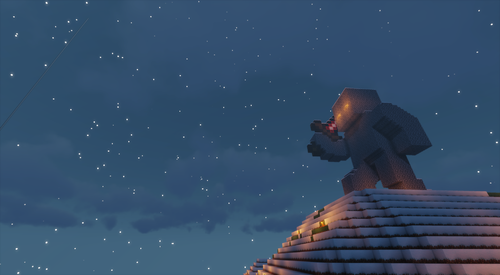 River next to Rose Ridge 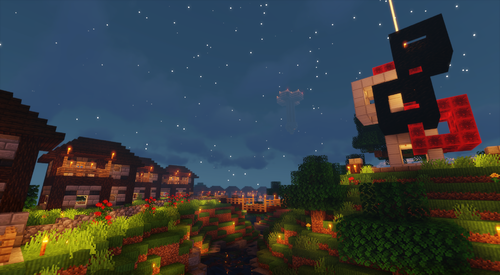 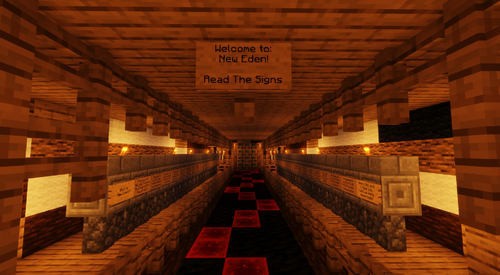 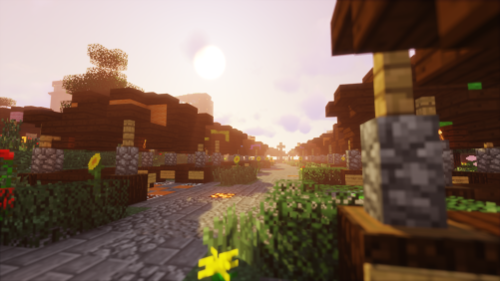 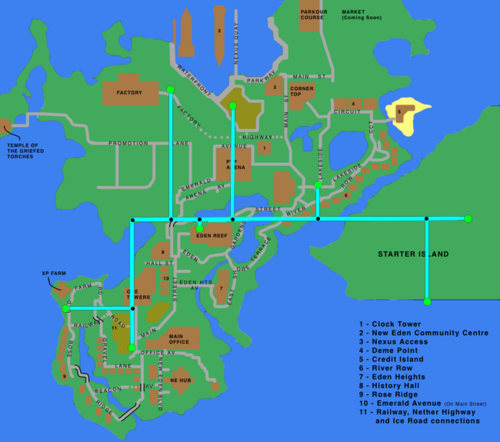 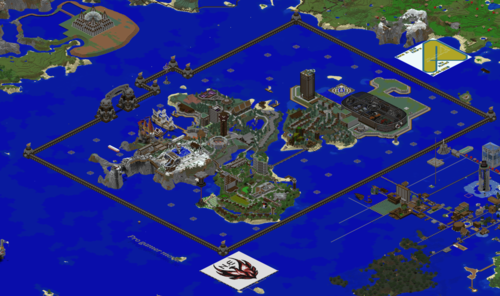 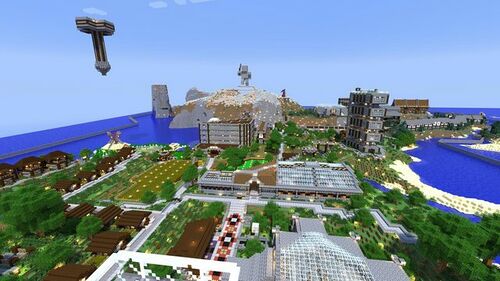 Render of New Eden from the view platform.

Eclypto18 logged in to MinecraftOnline and announced that New Eden has officially ended. The reason why it was ended was because he did not want New Eden to become like other towns and end without a notice. Everything was complete in the town as well according to