Officially founded on October 23rd, 2018, Aeston Isle, or sometimes simply Aeston, is a town situated on twin mushroom islands of the same name. Located in the far-northwest frontier, the town is far from any warps or major rail lines. Aeston offers itself as a break to travelers and explorers, and as a calm place to settle down. It has operated as the terminus of the Mushiana boat route since 2020.

Aeston Isle and its surrounding islands are united under the First Aeston Republic. The islands can be determined by the presence of torches and of name plaques, for America Isle, Bastillia Isle, the Gemelos North and South Isles, the North Outer Islands, Agarsted, and the Sandbar respectively.

Aeston Isle as a geographic formation was created sometime after the 2013 Border expansion. It remained relatively unsettled for many years. The only contributions were two court-styled structures made by

Violet_Apathy, who was a moderator at that time. In mid-2018,

Hirudo6 constructed the first iteration of Cobble Port while sailing. In October of the same year,

Anna_28 regarding the fate of Violet_Apathy's builds, where the decision made to incorporate the previous structures into the town.

In its first month, several users moved to the town, namely

thesprazzzler. Hirudo6 later joined as well, refurbishing Cobble Port. Snakyman's involvement in the town, as well as his BenEm ties at the time, later gave rise to a discussion about joining the Benamese Empire, however this offer was declined over concerns of integration requirements. Later, an offer was made by Hirudo6 to form what would become the Daybreak Union, in which the town would remain sovereign. The offer was accepted, from which point Hirudo6 began to contribute to the town officially. The construction of the North Peak terrain extension zone, along the northern coast of the isle, by which an underwater shelf was reclaimed as surface area, in addition to housing and gardens on this area were spearheaded by snakyman.

With the founding the D.P.W., the Aeston Harbor of Refuge and roads were produced, contributions which would prove foundational in the urbanization of the island.

Over the next few months, improvement on the town progressed steadily. The government was formulated, farms were built, and many new structures were erected. Several other nearby islands were also incorporated into the town of Aeston and developed on, such as the Bastillia island tree farm.

Hprick settled, residing at Aeston for a time and contributing many buildings. Progress continued with a noticeable boundary in workspaces- Hprick on the northwest, Snakyman on the east, and Hirudo in the center and southwest areas, with each user contributing primarily to their own sphere.

This progress slowed however, as by early 2019, Aeston, no longer new and available, was less noticeable. Hirudo6 withrew from the server around this time, and near the end of the year Snakyman had been banned. Hprick and Decoder both became less active over time. The town remained unmodified for roughly one year, though Hirudo began further development of the island town sometime in the summer of 2020, alongside the arrival of

Powerful geomancy was exercised by Hirudo6 and SanityBGon to raise part of the seabed south of the island above sea level, creating a second, completely new, habitable island. With selective planting of spores, the mycelium native to Aeston quickly spread to the new landmass, unifying their ecology.

Tragedy occured on July 24th 2020, when Craig The Zombie went missing. It is speculated the disappearance may be connected to The Sheepocalypse, as Hirudo6 was at Aeston during this incident. Alternatively, Craig may have been hunted down and killed as part of an admin campaign against illegal mobs. Irrespective of the cause, the town mourns his loss and retains hope for a restoration of Craig to his home.

In early September of the same year, Aeston, Gemelos, Bastillia, and Agarsted were connected to the Mushiana boat route, with Aeston Isle being the terminus.

In 2021, Aesanian architecture began to evolve, adopting increasing complexity. Drawing on the fundamentals of the Building Theme, Hirudo6 designed a system that would keep Aeston cohesive while also being more impressive as a build. As a result of this, the town inceased in urban density, gaining new houses and public spaces such as the florist and butcher, as well as seeing remodellings of older buildings such as the local Daybreak Union headquarters. Bridges to the new island have been finished, and development on it has progressed.

There are plans for the continued development of Aeston, and the town is open for citizenship. 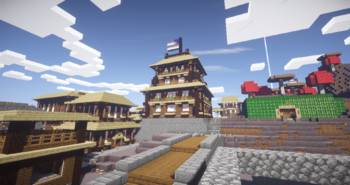 Aeston Tower, with a patriotic flag on top

In order to help the town cohere amd appear unified, Aeston has a building theme that all buildings must conform to. The building theme has not been altered since the town's founding.

Deviations from the theme are occasionally allowed, but builders could well be asked to alter it. Egregious violations will be removed by the Department of Public Works. If a new resident in unsure what to make of the theme, most houses will serve as a good example. 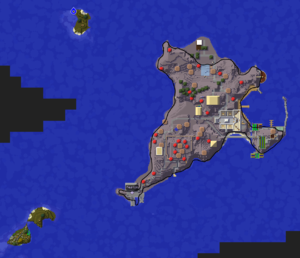 Aeston Isle from journeymap as of November 20, 2018, with the original island outline outlined in black. 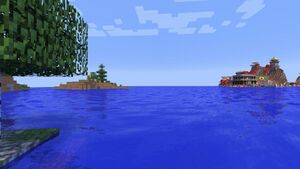 A view of several of the islands from Bastillia on December 23rd, 2018. 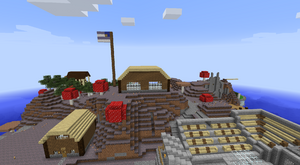 A view of Aeston Isle's Town Hall, Arena, D.P.W. HQ, as well as the playerhome of Decoder1. 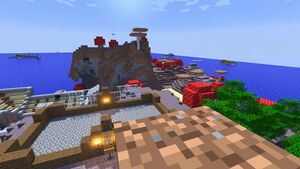 The town hall early in its construction. 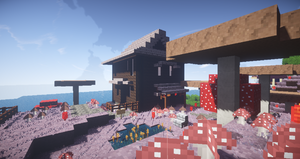 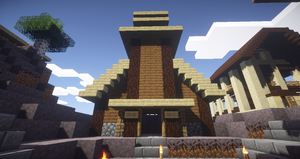 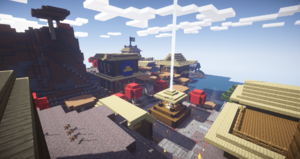 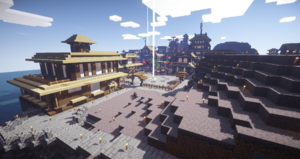 A view of Aeston Isle, taken in 2021.
Retrieved from ‘https://minecraftonline.com/w/index.php?title=Aeston_Isle&oldid=75378’
Categories: