snakyman is a legacy Diamond Donor and MinecraftOnline’s #1 antihero. A proud son of the Forrrest, he spends his days working on strange plans to take over the server, trolling noob towns, and building cities. He is known for working on some of the servers greatest and worst cities, and spends most of his time in-game managing the towns Snaketown and Newport. Not many people have seen behind his helmet and looked at his empty, derpy, eyes, but those who have have never been the same. Snaky is tied 3rd place for most bans and successful appeals in server history. He is widely known as one of the nicest humans on the planet. He is the President of Freedonia Road Co. as well as a noble of the United States of Bedrocco. He was also a noble of BenEm.

snakyman is loved and hated throughout the community (he is pretty controversial, with a high amount of good reps and a high amount of bad reps, with his approval currently at 58%). He is widely known as a Troll.

He also constantly advertises for his town, Snaketown, and if you ever see him online, you have likely seen him advertise several hundred times.

snakyman first wanted to join MinecraftOnline during August of 2017, but did not have his computer with him, and forgot about it until October 2017. On his first day on the server, he remembers 3 things: being called "snak" for the first time, finding Skyline and its 'free birch' building and adopting the ugliest wood, birch, as his preferred material, and how damn laggy the server is! He then found Forrrest, and decided that it was as good a place as any to set up camp.

“Snaky forrrest is literally so ass why do you live there”

The first place that

snakyman explored was Forrrest. He is one of the only regulars who has lived in the Forrrest, which is amazing because he essentially has an entire warp to himself. Shortly after joining, he created Snaketown, and he poured hundreds of hours over the next few years into the place. Snaky took it upon himself to repair many of the torn down trees in the area, and to make clear ways to navigate the warp to avoid ugly cheap cobble/wood/dirt pillars and bridges etc. Snaketown grew its connections, and as snaky grew his influence in BenEm and Freedonia Road Co., many road links were constructed connecting to Forrrest. This allowed for more cities to grow in the northwest oceanic region of Freedonia. Snaky later obtained a nexus for Snaketown, linking Forrrest to the Nexus system.

Everyone shits on Forrrest, but thanks to the efforts of snaky and his crew, it has actually become one of the most used warps in the past few years.

snakyman puts all of his effort and resources into building cities. He can almost always be found at one of his towns; usually at Snaketown or Newport, and sometimes at New Snak City. He runs them them mainly by himself, with help from a few others. All 3 of these cities have a nexus link, and He is also town staff at several towns.

Cities Founded (in order of best to worst)

Past this point these are more of just trolls than cities

snakyman worked on several cities and helped create many organizations, and is now in the MCO political elite. He is usually too lazy to do bulk works by himself, and pays his minions to do his boring work for him, or has

AlphaAlex115 gather noobs to do it. This slavery includes cutting down trees, leveling hills, or gathering resources not available in auto-farms. Snaky has essentially created too many organizations and cities to effectively run all of them properly at the same time.

also in League of Peaceful Towns and Settlements (debated)

snakyman loves building! However, many of his builds are never finished, but I will try to list all the ones with wikis here but there are wayyy too many to count

snakyman is a feared snek on MCO. If a person harms or offends

snakyman he tends to have violent reactions. This is why he came up with the idea of Gayetria, Soviet Eden, etc. He has many PVP kills, and no legitimate PVP deaths. He was banned from Peaceful Society for killing noobs that would not have stopped hitting him if he did not kill them, so he ended up killing members of their town 8 times. He was later unbanned. He has had multiple generations of his sword, Snak Food.

snakyman donated to become Diamond Kit in late 2017 pretty much to spite some random guy who joined 2 days ago who bought diamond kit, and kept making fun of him for not being diamond kit.

Getting diamond kit turned out to be one of snaky’s best decisions, because soon, the donation system would end, making perks unattainable for about a couple of years. Snaky was one of the only active legacy donors at the time, and decided to sometimes use his perks to troll players and pvp. Being a diamond kit, snaky could create a /heal macro, which instantly made him one of the most OP players no matter what. Snaky was able to fight off entire towns of people at once because of these heal perks, and travel quickly with jumpto.

Snaky's iconic sword, snak food, strikes fear into the hearts of many. These are all existing versions:

Snak Food I was crafted by

witchy1000 for snaky to aid in the Czechpocolypse. This sword has all max enchantments for 1.7 except looting and unbreaking. It is currently displayed in Newport's Odds and Ends. This sword killed

api448 and started the war with him.

Snak Food II was crafted when snaky was in need of a new sword. It was made by

Paladin_Heihachi in his nether grinder. It has all 1.7 max enchantments except for Looting. This sword's most frequent victim was

1posa1, who he killed repeatadly during and after Lemonaid Town. It also killed

This one was obtained by killing

SleeplessTheCat in his trap in Forrrest when he learned sleep was planning to kill him.

This one was named Sleepless's Memories VII, the seventh addition to sleep's line of swords. It has all 1.7 max enchantments. It was renamed and given mending in 2022. This is currently being used as snaky's main sword.

snakyman was MCO's resident troll for some time. His target are usually noob towns, and his signature move is making 'gay' or 'communist' versions of towns and building giant penises on mountains. He is currently banned from the MCO discord for trolling it several times. His discord trolling consists of shitposting in #general and spamming links to Three Big Balls in chat. You can tell that he is a troll from reading the rest of the wiki. Just thought I should specify it.

Oh boy a lot more they just don't all have wikis

Behrologist page has some more logs) 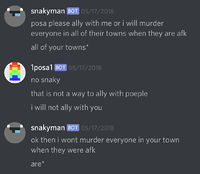 This is a summary of his journey, essentially. Days after he first joined,

snakyman found Forrrest and started making what is now Snake's Mansion in Snaketown. After making the mansion, he was inspired by Numington Town and another town I cannot remember the name of to create Snaketown. Snaketown grew, Industry Island and other islands were settled, and New Snak City was created because he wanted a place to build on land (one of the many issues with Snaketown is that it is floating above water). He has been a target of many griefs due to the griefer known as

lemons222 disliking him. Then, the bane of his existence on mco was created: Lemonaid Town. He tried to ally, but then quickly grew frustrated due to the lack of cooperation from

lemons222. The town was revealed to be an attempt to recreate N-Town, but with Snaketown and Lemonaid Town. Months later, after endless repairing grief and having no time to expand Snaketown, he founded the Isle of Snak. Around this time, he was brutally fucked by the EPU over the course of most of 2018, and was their main target for griefs. He also did some trolling at Aquaton, Crown's Landing, Townetria, Charlietown, and more. Then, he started the Freedonia Road Co., which is responsible for building many many roads on the server, and making a complete documentation of most roads on the server. Snaky went on to play semi-peacefully until the founding of New Eden. This bothered him and his allies because the town was taking in pretty much all new players on the server. He pvpd the town as a joke, knowing that it wouldn't actually solve anything and then eventually cofounded Soviet Eden. This resulted in his ban for 6 months. He rejoined and sought to bring attention to other towns, as there weren’t many active cities at the time after New Eden. His allies talked of founding a new town. This town would be led by multiple people and have different districts, and would require a lot of effort. This project is what became what snaky is best known for: Newport. Newport was very successful, becoming the server's busiest town. He recruited some town staff and got to work. The city avoided controversy until the War of Finland, which resulted in another ban (and quick unban) with him and

KingServal, who were banned for recreating their 'Fuck you penis mountain' from Crown's Landing outside of Finland. After this third ban, snaky decided to give up risky trolling and pursue growing Newport. This is what he is still doing today.

walteratt after his macromod glitched and said "a" 11 times. He was unbanned in 3 minutes.

FlyingJellyfish for charges of griefing relating to Soviet Eden.

Krenath. This was a rare instance of an appeal with the condition of limiting the free speech of the unbanned player, this was due to the alleged harassment of New Eden residents and staff.

On May 26, 2020, Snaky's Freedom of Speech was returned due to good behavior and his warnings were removed.

After rejoining the server, most of the community disliked him due to anti snakyman propaganda. His reputation dropped 30 points. He continued to work on Snaketown peacefully, and then founded Newport. His reputation is continuing to rise to where it once was.

On November 17, 2020, snaky was once again banned because he claimed a mountain too close to Finland. He was actually cleared by the admins a day prior after

As time went on, players left,

snakyman became less active, and he is now known as an "old player." Snaky still comes on for a few days every one in a while, mostly if someone pissed him off on discord or to maintain his cities. When he joins for the first time in a while, it is met with ":O" or "OMG SNAKY INGAME?!?!" because people seem to respect old players for some reason even if they are total assholes lol. He seems to be remembered for being a notorious troll and his towns. Maybe he will become active again, but is scared of getting banned for no reason again.

snakyman has gone on several trolling ventures and pissed off many people. He has been the target of many grief raids from the EPU. Some of his enemies (listed starting with the worst enemies) are here: 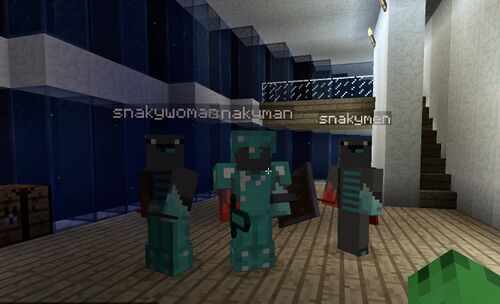 The Snakymen in Newport's Ellipse Tower 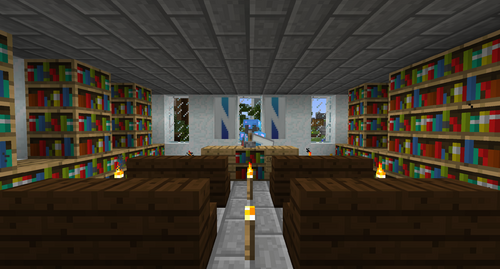