hprick is a builder from the Netherlands.

Net worth in MCO: 609 diamonds 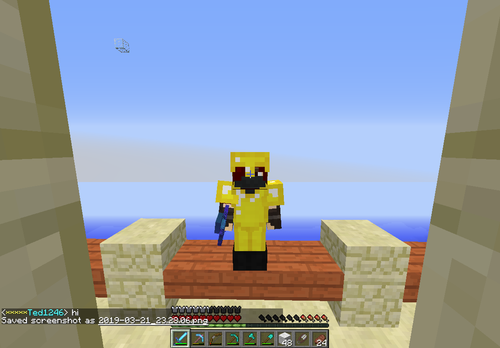 Hprick switches home locations every time he starts a new project: He started living in Dandelion Town, after slowly building that up on his own he moved to Isfiskholt, his new project at the time. During his time in Isfiskholt he got to know

Appelsaus_; this is where his BenEm involvement started. Not too long after he moved his home location to Tussenstad to help

IvanLeshev with building this now large city up. Starting in a small home in the Ice District of North Tussenstad and during the southern expansion of the town he moved into the unfinished Brandarix Tower skyscraper in South Tussenstad. This is his permanent home build, but hprick has continued to switch his home location more when he started new projects on other places. From january to may 2018, after his time in South Tussenstad he has lived at the building site of a new town he's building, called Port Lochrainn.

On the 18th of may, 2018, hprick decided to completely change up his MinecraftOnline experience and moved to Sandmore to help

kittyfreak500 expand the town. hprick decided he needed some time away from all the hard work and needed to get in touch with old-school survival minecraft again. In Sandmore, hprick became a key part of the community of the Kingdom Of Marinia, which he helped build up from the ground. On the 11th of June he switched homes again, awhile staying in the Kingdom; he moved to Conquest Island, the first colony of the Kingdom Of Marinia. A little bit later in June, he switched back to Sandmore again.

In late 2018 and early 2019, hprick switched his home back to Tussenstad, then lived at Aeston Isle for a while to build Casa Verrilli and then went back to Port Lochrainn to build some more there.

Brandarix Tower is one of the few big projects he ever did, because hprick loves building small towns and houses with lots of details the most. Because of this, he is getting the big work on Port Lóchrainn done as fast as possible, so he can go on with the smaller builds soon. If you ever need detailing or an interior to be made, hprick is willing to help you!

Furthermore, hprick has contributed to every single district of Tussenstad and made half of the BenEm boat route.

hprick also cherishes a huge record collection, which he stores and showcases in the Rainbow Records museum.

hprick has written two books: A Beginner's Guide to Ethical Stealing and Pole 2 Pole, both distributed by Alkekengi Publishers.

hprick has formal private residencies in the following places:

There are currently very little policies connecting these towns, but if you have a formal position in one of these towns, you will probably get one in the other ones more easily. In the very near future, all these towns except Isfiskholt and Dandelion Town will hold official embassies of all the other ones. Isfiskholt and Dandelion Town will not hold these because they are simply too small to have that many new buildings.

hprick likes stealing too, but don't be afraid he steals your stuff! hprick only steals from people who haven't been online for 2 years or more. He always checks player signs, uses the /wholiveshere command and after that checks /lastseen. If this shows the owner hasn't been on for over two years, hprick steals from unlocked chests, never intentionally griefing a single block. His pretentious ass also likes to call this act Ethical Stealing. Besides that, he hands out a lot of stolen goods to those in need and uses stolen resources to build roads, bridges, tunnels, and whatever makes the average Freedonian citizen's life a bit easier.