From MinecraftOnline
(Redirected from NovumCulta)
Jump to navigation Jump to search

Novum Culta is an ocean city founded in February 2012, located in the vast open waters of the second stage of the border expansion. Originally a puny outpost in the vast ocean created by Ldog540, the city began rapid growth when Broncoskip and Mottbro took an interest in the insignificant blip on the map. Novum Culta is one of the more lively cities due to its recent founding. Typically, there is at least one player in the server playing who has a home in Novum Culta.

The city is linked to the Freedonia Railway System via a partly underwater line leading several kilometers to Mycelia, and onwards to the mainland from there.

The city is part of two boat routes: the FlyingJellyfish route and Mushiana route. 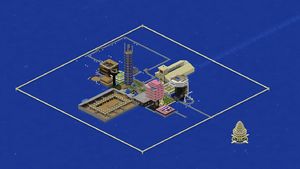 Map screenshot as seen on 3 Mar 2012, under construction

Ldog540's prayers to the god

broncoskip were answered. Descending on a lightning bolt, Bronco blessed what was to become Novum Culta with a horde of seed materials from which the city was grown. The materials would have been worthless, however, if not for the talents of

mottbro who scuplted the raw materials into Novum's streets and mall. With the trio hard at work, the town rapidly grew into a hub for players. After a time, it was decided to link the remote Novum Culta with the Mycelia Rail Line. A massive underwater tunnel was created for that purpose. Miracle struck when, on May 8th, 2012,

SlowRiot made Novum Culta a warp. Sadly, due it becoming a warp, the quality of buildings being built in Novum Culta has begun to deteriorate.

Interior of the railway station

Statue on an island between Novum Culta and Mycelia

Nhbdy4Ever has created an underground section of Novum named, aptly, Lower Novum. The construction of this section of the city in itself brought a huge influx of new citizens. Despite the misconception that underground cities are tight, claustrophobic, and poorly built, this section of Novum Culta is quality and spacious. The two sections of Novum Culta are amicable and united, but sovereign of each other's sphere of influence, with each section being ruled by it's own mayor.