Forbidden Outpost is a small town in the far northern area of the world.

Initially started as an invitation-only project organized by several admins, Forbidden Outpost was thus named because it was not initially given a public warp. This village was intended as a chance for admins to play true survival, with no temptation to spawn items or use previously-accrued materials. Several trustworthy players were also invited to contribute, on the condition that they bring nothing whatsoever to the village - everything built here must be mined from materials here.

Later the warp was opened to the public, and the town declared available for public build; in time, a railway station was constructed, and Forbidden Outpost now serves as an important rail hub providing changes to destinations in the North.

Forbidden Outpost is located in the frozen northern wastes; an area remarkable for a large profusion of snow, tundra and taiga biomes. The heart of the town is located at a point precisely north of the center of UnderWorld, and precisely west of Amp City.

The precisely located geometrical position of the town center was designed with a crossroads in mind, to permit a perfectly straight road to be run North from Underworld, and to meet a similar road running West from Amp City, forming a town at its intersection. As such, each of the two roads running to the town are perfectly straight. At the time of construction, the road North from Underworld was the single longest straight road in Freedonia, and also the longest road to be constructed in one sitting. It has since been upgraded to house a railway line underneath, in the style of the other major trunk skyroads. 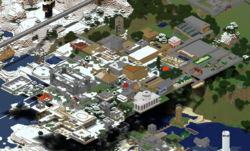