Once a thriving town, the future of this settlement is now in question since the majority of the builders related to it managed to get themselves banned. Reputed primarily for its abundance of incomprehensible cobble box constructions which some have labelled as unimaginative, or hideous. Ever since one of it's co-founders (

muthemu) got banned for disallowed client mods, the town fell out of the founders' hands. People built hideous cobblestone structures, and it slowly became a hotspot for crime. Now mostly abandoned with many of its Founders living elsewhere (

Machines_Are_Us's underground vaults). People have since built intimidating structures like the Penis Of Emucraft (reputedly by

shypixel) and a big structure of

xanderstrike's made out of gold and iron blocks.

Despite this apparent abandonment and lawlessness, the town continues to expand like some sort of perennial weed; going so far as to begin to encroach on the nearby beautiful art resort island, the Isle of Muu, forcing its owner

The peaceful thriving japanese-themed town of Kurai Cho to the North-West is also at risk of encroachment. Prior to it receiving its own warp, the Emucraft warp was the closest to Kurai Cho, increasing the traffic in the area considerably.

"Why did slowriot remove emucraft as a warp? It's the best town ever!!!" -

This was meant to be a secure fortress with a feudal system. We decided otherwise and just made it a kind of dictatorship instead, with the founders at the top, the citizens at the bottom. You can still see the founders' mark left upon Emucraft today - a massive fortress where only founders could enter. Since then, the castle has been stolen from by people such as

okoshima, a thief feared throughout Freedonia. 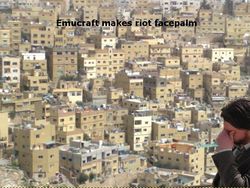 Some have suggested that the cobble box hell of emucraft is based on the half-finished architectural style of Amman, Jordan