The Tour is a system of teleport pads in glass viewing boxes that allows players to get a view of a few major builds and towns on the server. Players can take a tour with /tour or from the pad in the Visitor Centre, and exit at any time using commands such as /spawn.

Players can choose between 3 Tours; Freedonia, Historical, and Extended Tours. Stepping on the green pad in a viewing box will take you forward in the tour, and blue pads will take you to the previous location.

The Historical and Extended Tours were added on 2022 after the Tour of Terror, separately from the preexisting Freedonia Tour. Exploring each tour exists as advancement as of 1.12.

The Freedonia Tour feature builds selected as the only Tour until 2022, many of which are built before 2014.

The tour teleport pad at spawn

Cinematic screenshot of the Central Nexus and Project Angel

Bright Lights of Lava Town Plaza from the Rail Line 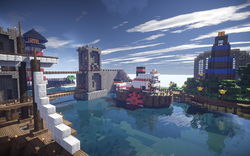 Inside one of the buildings at Avalon

Buildings on the floating islands at Batugus

A giant angel statue made of white wool, with Nexus Central and Art by

A major town with the theme of lava. Also showing a Pigchinko board.

As the name suggests, this warp is a town made of pixel arts.

A minigame made by

FlyingJellyfish where players must try to eat all the cake, with a sky bridge nearby.

Glenfiddich is one of the largest towns in Freedonia, created mainly by a group called the Glen Team.

A city built entirely by

Xenouk. A model scale of the Babylon 5 station also constructed by Xenouk can be seen nearby.

Another large collection of pixel art, this collection is flat above the ocean and pokemon themed. All made by

Originally a set of natural villages, this area has been expanded into a large city with the theme of natural NPC villages.

Liastrae, this town is the home of The Accord. Its Pigchinko board and a ship made by

fmxstick can also be seen.

A settlement with extreme attention to detail in every building. The Yellow Bouncer, Tannhauser Gate and Caravelle Zero are also easily visible.

Giant 3D statues of most minecraft mobs and a few players, mainly built by

bubba_basti, this town uses Craftbook in almost every building allowing players to interact with the builds.

A settlement built on top of floating islands in the sky, with an underground complex filled with farms and generators. The Guitar and Pokethedral are also nearby.

The world's spawn point, still in the same place it was when the server opened years ago. Spawn is the centre of activity in Freedonia, with places like the Visitor Centre which includes cake. The Freedonia Railway System can be seen outside the viewing box.

This tour feature builds from 2010 to 2013, keeping its classic looks today.

The Spawn pond keeps its shape from 2010, when

runechan first set foot on the world. New and old buildings meet each other.

Fortified by a 220m-long wall, this city was formed according to plan as an expansion of a sky town Dial Republic which resides nearby.

Standing next to Nexus Central, a copy of Stanford Angel was built using only natural resources.

Construction for the Power Plant was obstructed due to the Ghast War and abandoned ever since. The place is now maintained for its history, and once a warp.

This town administered by the Glen Team expanded up to nearly a kilometre square. Some of the facilities are still used in server events.

The arena of one of the oldest games in MinecraftOnline. Capture the Flag arenas are located across the old expansion of Freedonia, and the arena in the tour is located near HillValley.

The underground village formed by

SlowRiot. Numerous roads extend from the tower on the surface.

CatVille is located just to the southwest of Spawn. It is still a warp to this day, with the signboard crammed with hundreds of visitors' messages from the past and present.

A Chinese-styled temple built by

bubba_basti that worships the Fishy Gods.

The wood and cobblestone-themed buildings (converted to stone bricks later) reformed in 2018 and were completed in 2022.

Various admins (at the time) statues such as

Flippeh and the isle founder,

AgentMuu, are built and kept here to honour those players. Many of those statues were placed at Spawn.

This tour feature builds from 2014 to 2022, with more variety of blocks, colourfulness, and creativity.

A town that is forever Christmas, no matter the day, month or season. Nearby has one of the Batugus Builds, The Iron Reef, a public farm for some resources.

Draglide12 built eclectically styled buildings by two valleys of desert and savanna biomes with oases nearby.

A city on an artificial island full of skyscrapers and busy streets.

A 6-year project led by

Mr_Fudgy, home to the Neighbor Luna, an ancient floating village resurrected from ashes.

Nicknamed "Fake Japan", Saikyo (west capital in Japanese) is the settlement formed of islands that resembles the country of the rising sun.

Regarded as the best (active) settlement in Freedonia, New Eden is a city located in the southern region housing 200 residents. It has recently just closed down its gate for new entries by its founder

Soaring above the skies of BenjaminStad and AmpCity, this monstrous dragon was created by

Filled with darkness, as if it is in hell, strange events occur within

swissm4n based on the image of the Andromeda Galaxy. You can see some of McO's maparts on the tour or on the mapart page.

This place in The End powered by the PenguinDungeons plugin is a dangerous place with various types of shulkers and rare resources which is hard to obtain elsewhere. You need an End Crystal to activate the dungeon.