Shireford is small piece of land fortified by

jamexin with high hopes of making in a gorgeous freebuild town area. It started as a small, uninhabited piece of land smack dab in the middle of EastAustania and Quarryton and developed into a large and cultivated homeland to many players. Plenty of people have decided to build structures and otherwise in this large and spacious area. There's plenty of things to see and do! Such as the Dye Hard arena, the fashion show, or even some of the spectacular player made builds! Stop by and post something on the notice board. 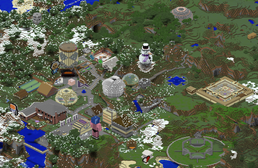 Heads of the Contributors

The town was founded with the intention of allowing close friends to build close together and make our own type of community. To build a positive environment and have place for some spectacular builds and ideas. The first build was the chestroom which was build hastily to hold all the items to allow for easy building. The resources were spread out between the other contributors to make amazing builds. Eventually, after builds sprung up in little to no time a Nexus warp was added. With the hasty development of the town itself, it welcomes new members of the community with open arms, and adds them to the wall of heads seen behind the nexus warp!