Founded as a castle by

AndreyDio in May 2011, Glenfiddich has grown rapidly and is now one of the largest cities in Freedonia. The city is administered by Glen Team. 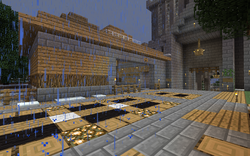 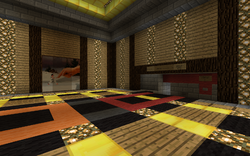 Glenfiddich Metro:
The Metro is the fastest way to get around town. All places of interest are just a short walk away form one of the stations. The entrance to the Central Station is inside the main gate, opposite GT Shop.

Tour of Glenfiddich. In about 7 to 8 minutes, the tour takes you through all central districts. A personal tour guide explains the sights in the chat window. Please do not leave your cart until you return to the station. 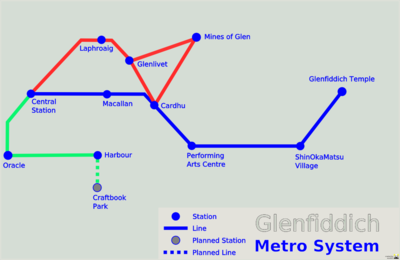 Map of the Glenfiddich Metro System

bubba_basti for a plot. Unauthorized buildings may be removed without notice. The town's residents are friendly and welcoming.

The scenery from afar

Historical view of Glenfiddich when it was made a warp 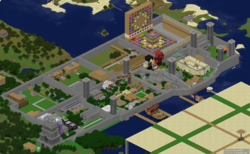 In the deep past of Freedonia, the castle of Glenfiddich was built by Duke Dzirt, the ruler of the surrounding country. A tyrant and murderer, Dzirt was duly hated by his subjects and neighboring nobles alike, making it a necessity for him to live in a strong fortress, cold and unpleasant as it must have been back then before the invention of glass windows.

One of his biggest rivals was the emperor's uncle. One day Dzirt and his confidants got drunk and raided his home, killing him in the process. By this deed, Dzirt doomed himself to eternal pursuit.

The emperor was furious when he learned of the violent death of his relative and ordered the capture of Dzirt, dead or alive. Having no allies left in Freedonia, Dzirt and his followers prepared their seemingly impenetrable fortress for siege. The emperor tasked General Dio with the attack on Glenfiddich Castle. But even after two years of siege, the castle being completely cut off from the rest of the world, Dzirt still laughed at all the fruitless attempts to conquer his unassailable fortress. Dio was desperate and he decided to go on a suicide mission. He asked his men to shoot him over the castle walls with a catapult at night. Despite concerns that he might be going mad, his soldiers obeyed — and miraculously, he landed in the castle's fountain and survived, heavily wounded. Dio opened the main gate and his men took the castle, killing everyone inside. Unfortunately, Dio's wounds were too grave and he died the same night.

The emperor, impressed by Dio's courage, decided to give Glenfiddich Castle to Dio's eldest son. Under his rule, the once sinister fortress was turned into a welcoming fortified town and soon several walled districts had to be added to accommodate the growing number of inhabitants. Even nowadays, the town of Glenfiddich is still ruled by a descendant of General Dio,

AndreyDio, who continues his ancestors' work.

Some careless people have claimed this account of Glenfiddich's history to be made up bullshit and that the town was, in fact, founded by

mrsprinkly in much more recent times, and is still being developed and expanded by Glen Team. Their foolishness becomes obvious when taking into account the fact that every single one of them has managed to stab himself while polishing his sword, shortly after making that completely unfounded statement.

Rumors have been spreading that a great evil is lurking somewhere deep below the city. This photo was retrieved from the body of an unfortunate adventurer: 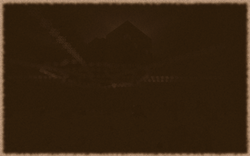 bubba_basti have made a christmas tree: 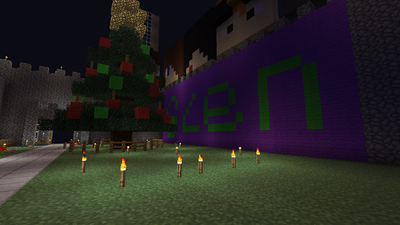 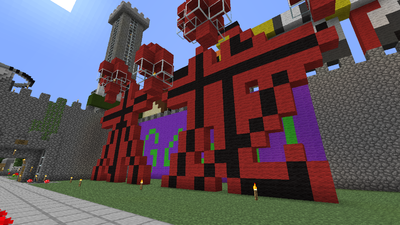 Glenfiddich now comprises the original 11 walled districts, all named after whiskey brands, a jungle district, a harbour, and a vast expansion area, in which, among other buildings, the Japanese-style ShinOkaMatsu Village is located.

Most visitors to Glenfiddich will arrive in this district. The entrance hall houses the popular GT Shop and the Metro station. The other buildings provide public services or entertainment.

This district was formerly the Castle of Dzirt. Today, it is subdivided into three distinct areas:

If you seek entertainment in Glenfiddich, this is a good place to go.

The Glenfiddich Pigchinko arena fills the whole district. It was completely rebuilt in early 2012 to make use of the new Craftbook ICs programmed by

Drathus42, and to improve its overall appearance.

Winter district being developed by

All buildings in this district adhere to the theme of "wood":

New district with a modern style.

bubba_basti is building here, with support from

This artificial jungle was built by

nosefish after the update to Minecraft version 1.2.4 and houses the Jungle Tree Harvester. An elevated wooden path leads visitors around. Some of the trees can be climbed and offer a spectacular view of the city. At night, the jungle is sparingly lit and not particularly safe.

This expansion area has doubled the size of Glenfiddich, adding an imperial feel to the area by using 1.8 stone-brick for the walls. It took one whole day for

glitch80 to clear areas and build the walls.

The expansion has put the following inside the walls of Glenfiddich:

bubba_basti and expanded by many others, the harbour connects Glenfiddich with the destinations of the Great Circle- and Aeginus Boat Routes. Notable builds here include

The harbour at night

fmxstick. The village gathered builders far and wide around Freedonia so fmxstick expanded the village into the land closer to fmxstick's Bujutsu Temple and the rice fields.

Outside the walls near the Dalmore district, a shaft tower marks the location of a new mining camp.

As Glenfiddich filled up again it had to expand to give new Glen Team members an area to build within Glenfiddich this time it has expanded to the south.

ScarClaw72 featured Glenfiddich in Episode 54 (Part 1)and Episode 57 (Part 2) of Exploring Freedonia, as part of the third season.