A Southern Freedonia hub city in the deep southern expanses of Freedonia, 1500-3000m from the nearest services and towns. Serves as a community hub for many players traveling in the region. As of July 29, 2022, Dragon River became a Free build city, please build in unoccupied areas. If someone hasn't built in their plot, you can have the plot.

Dragon River is the capital of State of Cascadia Wood. It's sister town of 7 residents is New Wood 10k blocks back north towards Spawn owned by

Dragon River Peak City is the capital of the Union Of Kpan Settlements and since September 14, 2022 the USK is an independent state. 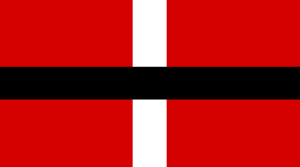 Flag of the Union Of Kpan Settlements

How to get there?

BillionPenny and Runarlogi have full perms given to them. Anyone else also has perms now.

Thousands of years ago the DRPC was orignally a volcano lul.

A few months before

Draglide12 was exploring the vast south when he came across the same exact mountain valley we come to call Dragon River Peak City. Drag placed a historical sign "drag wuz here" in what is now Annabelle Park.

Flamehaze97 was in the middle of building the Great Vera Highway which many use today. She decided when she got the road to Vera that she'd build there. Little did she know it would be a hub for those traveling in the south.

Cafi95 both were hanging out prior to Thanksgiving 2019 and decided to work on the town. The town was originally supposed to built within the mountain but that changed after more and more players came to the town. Cafi95 built their city house and helped build the frame of the now DRPC City Center and Dragon River Penthouses. As well as the pathways up top around the rim of the mountain. The town also originally had two other skyscrapers planned but were scrapped.

Over the course of the next few weeks, around 25 players have came to Flame's town and built there. See the District Directory below.

So towards the end of March 2020, Flame decided since she was mostly done with Project Cleanup and had a few things here and there to work on, that she'd go build some more in Dragon River. The town has acquired a few new buildings since she last was there. Also the wool farm in the town was griefed Mid March 2020, so she replaced the sheep and so far has 3 in the wool farm as of 3-27-2020. The week of April 12, 2020 saw the return of Dragon River's co-original founder

Cafi95 who helped redo the City Center structure in Dragon River Peak City. Not much traffic in the town during the month of April, as Flame is soloing her builds and remodeling her home. The Luna Forest Plot District and Fort Boone sprung up during this time and

pretzel33 is currently helping Flame with her Train Station around the city.

BennyBlazeIt who was inactive for several months, she noticed a influx of new players. Unaware of the news, she started reading chat and noticed there was a video posted that morning by Fit himself just four days after visiting MCO during the April Fools Anarchy Day over on Minecraft Java Edition 1.4.6. A hour and a half into the invasion the server reached full capacity with 120 players for just a few seconds. Around 1pm Eastern on 4-4-2020, the Nexus system was closed off and Bedrocco Empire was placed under lockdown. However, Flame failed to block off her nexus in time and is worried that the town may sustain heavy grief during invasion. The worst affected may be the Capital city of the old Cascadia Wood Republic, known as New Wood, which is directly on the front lines of the invasion at around 8k blocks from Spawn along one of the servers main routes built by

Tindwcel. Thankfully Flame has her most important items placed in a Ender Chest and her diamond gear as well as her food in password protected chests. Since Flame has not finished her last few roads of her Borderlands/HyperRoute project, she is also worried about potential sustained grief along her routes. Most worry some is the ones that have no signage placed yet. The aftermath stretched onwards for months but Dragon River was spared from the griefing that took place to towns as far as New Wood.

At the beginning of May 2020, Flame turned her attention to other projects and eventually took a hiatus at the end of the month. The town is currently somewhat dead with few travelers passing through or people having short lived ideas to further expand on the city. Flame is currently playing on Elder Scrolls Online grinding her Nightblade and she's unsure when she will fully come back to the game. She is possibly looking at Holiday 2020 but she's also looking at events around the world and she's unsure if things will be stable then as things have been slowly deteriorating since she started consistently playing Fall 2019.

Most of the summer, Dragon River became somewhat of a ghost town. Flame wanted to take a break from projects so she went more to do irl stuff. On July 4th, 2020, she had a falling out with a player and 2 admins and was banned on the Discord server. She went on hiatus and focused more on irl stuff and playing Elder Scrolls Online. A few players had come to see the town while she was on hiatus. She came back on 9-16-2020, and built some new builds in the town like the building shell to the Fox News Building, and 3 2D statues, as well as the F302 from Stargate SG-1.

Leah_Starcraft helped build the Herobrine Statue and shrine. The shrine says "Worship". Flame went during most of October and early November of 2020 and worked on the last of her projects outside of Dragon River. There were a few tweaks here and there. Mainly admin world editing a build off another build or maybe just checking up on Flame. She finally came back to her town around mid November 2020. Leah scrapped her ambitous tower since she had completely forgotten about it. Flame might hire

r9q to build in that spot.

Inspector_Foix helped build the train stations in Flame's town. The Slowriot Update statue was built with a iron sword or easier material build to be added later and was built by

Leah_Starcraft. Flame also connected her rail line to the main southern rail line and finished the bulk of her boat route with the help of

Anna_28. Flame also has been hard at work finishing off projects in each district. Downtown District and Luna Forest District being nearly completed with a few minor setbacks. Flame also attempted to connect her Lavatown inspired Nexus to the Nexus System but failed due to it being a rare occassion and how big it was built. The build will now be repurposed into a town directory or maybe a cool build. Only time will tell. Also should note there are horses in that build. Flame plans the last half of November and the first half of December 2020 to finish with all Dragon River projects. In December 2020 and the first of January 2021, Flame finishes her wikis up. In Early to Mid January 2021, Flame finishes Dragon River's projects. Flame leaves MCO on 1-7-2021 and transfers ownership to

Flame celebrates 1 year since the founding of Dragon River Peak City on November 20, 2020.

Flame came back to MCO off and on to complete projects and other things. Flame finally finished most of her town's projects during the middle part of 2021. Several local roads were upgraded, added, and removed. The Dragon River Expressway was added to provide a quick route to and from Downtown District and Fort Boone. Addition of floral and tree aesthetics. Addition of more anime statues. Renaming city bank and finishing building the bank. Two new residents came to Dragon River to build.

Runarlogi built a Cigar Sheep. Some existing projects were finally finished after put on hiatus. Other misc. projects were worked on. Due to indifferences with other server players, poor mental health, and being against the Microsoft migration, Flame left to focus on irl things. She also started to focus on her gender transition. Therefore, she closed off her nexus with cobblestone and deactivated her Minecraft Account.

Nofleet builds a junction for his ice road that leads to Emerald Mall. Flame is unsure if the Emerald Mall rail line is connected to her rail line.

Ren established the Emerald Route that links Dragon River and Emerald Mall. [1] Dragon River has otherwise, since Flame deactivated her account in September 2021, stayed dead. Flame decided to transfer control of her Cascadia Wood state to United States of Bedrocco, this was after Template:Ken the Fox seceded from Cascadia Wood. Flame is going to try to reactivate her account and migrate to Microsoft despite her anger over the migration. She hopes to focus more on roadways and maintenance of Dragon River. She will still allow players to expand and build in Dragon River. Her Nexus opens back up Late March into April 2022.

Flame maintained Dragon River, added one statue to the numerous amounts of anime related statues, and modified her rail line. Lighting addition finished for HyperRoute 35 up to Ironport. Addition of Ironport. Flame would give Dragon River Free build status.

Flame would end up leaving MCO for good this time after repeated harassment by specfic players within the community. Flame would hand over ownership to

ahri_29 and Union of kpan settlements.

There is a Elytra Platform for all people you can travel from Dragon city to spawn at full speed in 10 minutes. (Be careful with tall buildings or you can die!) 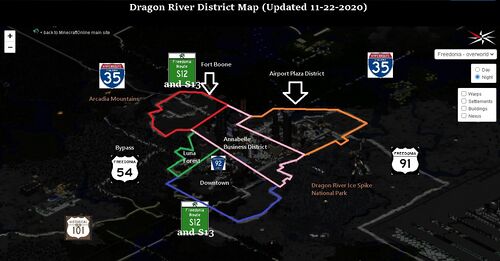 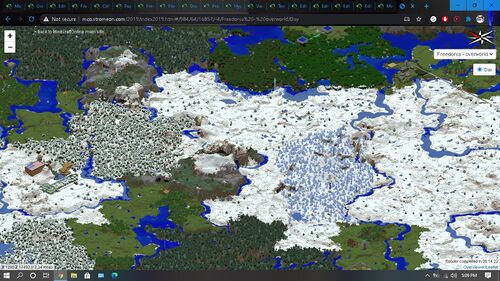 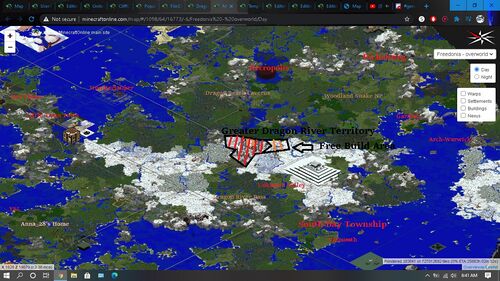 Original plans to expand Dragon River with help from

TomLaser2000, project was abandoned as he hasn't come back to MCO since.

Anna_28 and others needs to work on: 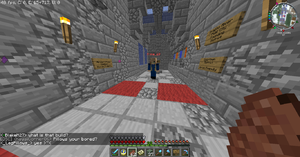 Flame and Anna attempting to setup the district nexus in mid-November 2020.

All Dragon River traffic lights are broken as of 1.12.2 update. Please refer to this wiki page for more information on the traffic lights. Freedonian Traffic Control All players have permission to fix specific traffic lights if they want to.