Map view as of 18 Dec 2011, showing the new expansions around Kurai Cho that sprung up since it was given a warp.

"Kurai's great, not only is it one of the biggest towns on the server, but it has the only working charged creeper factory in all of Freedonia" -

Kurai Cho is a Japanese themed town mainly built by

Reseres is a simple builder, enjoying simple luxuries such as having a huge sixty metre sailing yacht, a working shower, and three towns under his command. His PvPing skill is known as being "lacklustre" and he isn't very good at sticking to a task. At all. Most of the time on Freedonia, he does nothing of note or worth to anyone. He only makes cool things when he's bored, And boredom is rare in Minecraft.

If you're expecting a sixty paragraph conversation all about Kurai Cho, I'm not sure I could sustain it. It's competing for the most picturesque town in Freedonia, competing against such masterpieces as Port Dhal and others. It has a very low chance of winning, but any votes on its part are welcomed.

It has a working rail station that has a stunning view of the town, spread out below like a puzzle missing a million pieces. It is not yet complete, but soon it will be one of the best tourist hot spots, similar to spawn, except not griefed so often.

Reseres always accepts people to live in Kurai Cho if they don't grief and make badly constructed buildings out of dirt. That's what Residaemian is for.

Due to the high density of houses (and therefore lights), Kurai Cho is incredibly safe at night, so if you're looking for somewhere safe, feel free to pop in. 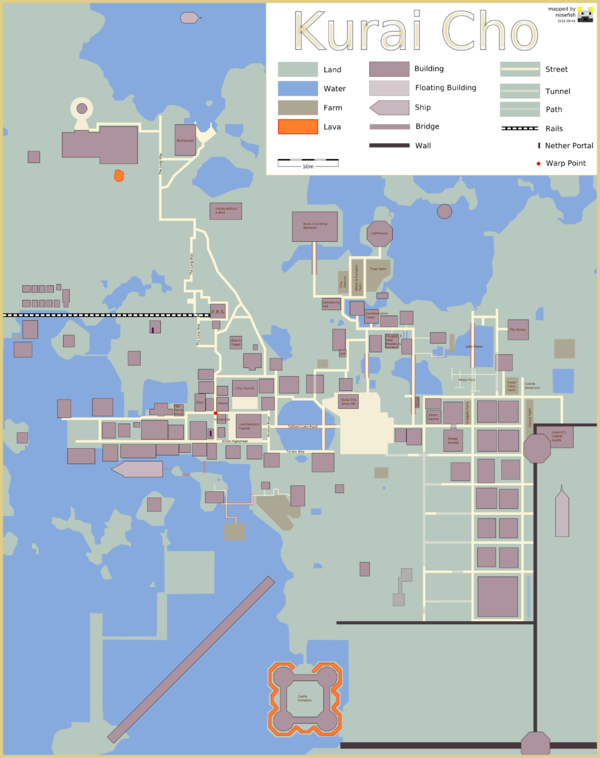 In around late October 2011, Res suddenly got bored with Kurai Cho, and gave it

To begin with he started welcoming many new players in Kurai. Sadly this got rather out of control, and due to a lack of free plots, people started building floating houses without sprazz's permission.

He has just finished a town hall he started in about October, and he has completed many other community buildings, with a large amount of help coming from

Recently in Novemeber 2011, Kurai has seen a new spring of growth when

thesprazzzler decided it was time to try to get a warp. Alas he was eventually successful. The warp point was initially intended to be further up the town but in a moment of confusion it was placed in its current position.

Due to being linked up to the Nexus system, on the 9th of June 2020, the KuraiCho warp was removed after nearly 10 years.