The End is a lost, forbidden place in one of Freedonia's many alternate dimensions. Surviving its harsh existence is as difficult as finding the portal in the first place, and while some return, fewer still return intact. 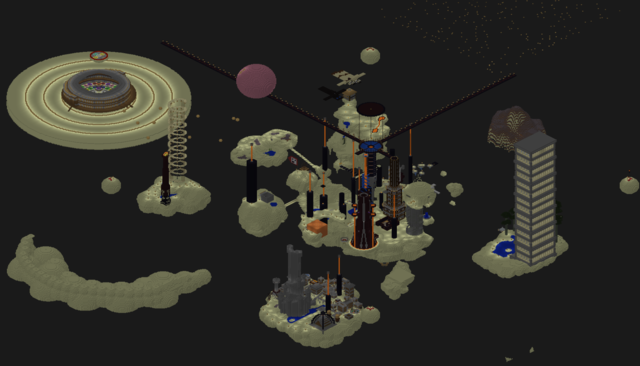 Locals speak of when AgentMuu, armed with a wooden axe and mountain-shattering resolve, ventured into the untamed void and cracked the very foundations of the endstone landmass, splitting it into many smaller fragments and devastating the local Enderman population. Wielding an army of iron golems and the rage of a thousand dead civilizations, AgentMuu drove back the Enderman swarms and claimed The End in the name of all of Freedonia. Resistance from local enderman tribes continues, despite being disorganized and outmanned; occasional skirmishes still break out on the outskirts of the colonization zone. 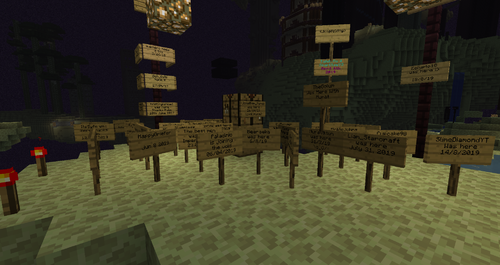 In the interest of the Iron Golems' ability to perform their job and keep you safe, players without sufficient protection are advised to keep clear of the outskirts until urban development has sufficiently progressed. As there is no day or night in The End, enforcing a curfew is close to impossible.

Reverting into tycoon mode, AgentMuu now invites only the pluckiest of adventurers and architects to contribute to The End colonization. The portal was hidden deep inside the Isle of Muu, where only the most brave or foolhardy of explorers dare to venture. Entering The End unprepared can be a costly mistake!

The only thing greater than the risk of death is the potential for greatness! The End is the one place in the server where all players are on an even playing field - that means no donor commands. Want to travel to that faraway island? Build a bridge, man!

Building in The End

Determined to develop the world's first democratic autocracy (best not to think too hard about it), AgentMuu has decreed a loose aesthetic for builders in The End - as long as constructions meet basic criteria, builders are otherwise without constriction in their designs.

There are two types of buildings in the End: village homes and skyscrapers. Large plots of land are discouraged when there are 200+ meters of space above it. Build tall! Build very very tall!

Furnished with his own island, Lothendal constructed an impressive, monolithic castle with a winding path to the top. Seeing potential in the surrounding area, AgentMuu broke ground on a new town he dubbed "Endville" after failing to think of a more clever name. Aesthetically modeled after NPC villages with distinct changes and improvements to reflect its location deep in The End, the newly transplanted residents of Endville enjoy exploring their environment, alerting Iron Golems to the presence of straggler Endermen, and procreating like rabbits.

The Ender Dragon is claimed to have been killed by Goderator TheSuicideBooth. Legend has it, that if you close your eyes and listen closely you can sometimes hear this God singing happily from the high mountains while preparing his favourite meal - Dragon Soup.

ScarClaw72 made a video exploring the end in his series. The video can be found here 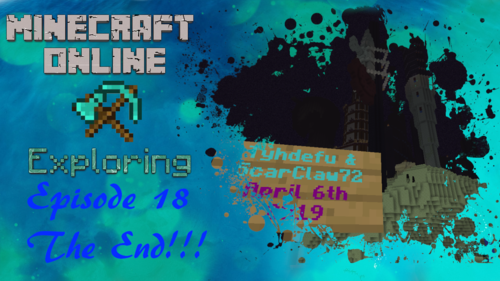