This page is about the 2017 project by the Freedonia Road Co. For information on bloo_noodle's highway of the same name, see Great Northwestern Highway.

The Great Northwestern Highway is a large Freedonia Road Co. project for road connections which has roots tracing back to

IvanLeshev's formerly abandoned project, the Icekansen, from 2017, and the original Snaketown - New Snak City Highway which was made by

mk59apr in January 2018. It was built to connect the towns of Snaketown and New Snak City. It was then given a new life when

bloo_noodle, who loves building roads, decided to remake it.

KingServal wanted to also add an expansion and started to work in a northern route for the project.

KingServal began the final draft of the network in late January/ early February of 2019. The project was coordinated by

snakyman. This was the first official project of the Freedonia Road Co. 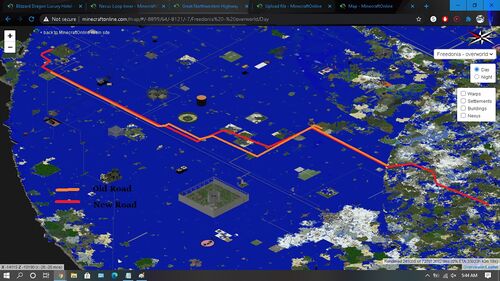 Map of Old and New Snak City Highway or GNWH

fthtjyjy's island; is connected to highway by Route 69. 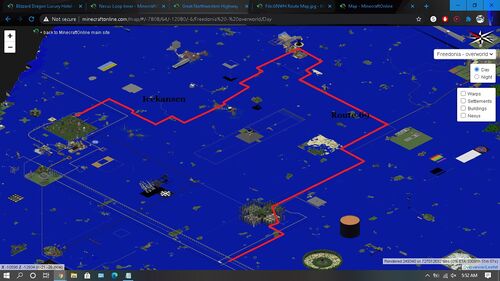 Map of Icekansen and Route 69

If you wish to get from Snaketown to Numington Town or vice versa, use the nether highway or use the tunnels to Forrrest.