Started in August 2016, Phoenix Isles are a huge set of artificial islands under construction. Phoenix City is on the main island with a dazzling skyline. 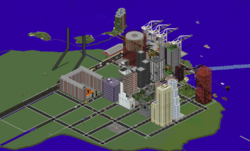 The ice road to Phoenix Isles built by

mk59apr on 2017/12/3. Decommissioned on 2019/12/10. Until the Railway and Nexus connections, this was the main way to get to Phoenix Isles, from the nearest nexus townbuildthing

Phoenix Corp is currently accepting donations of dirt to help make the islands. Chests can be located in the warehouse west of the port.

AyeMB thank the following players for their donations of dirt and other supplies:

Flamehaze97 with the help of

Frosty_Diamonds and members of Project Eros have permission to add to this area.

ScarClaw72 made a video touring the city in his 27th episode of Exploring Freedonia, as part of the third season.

Development of the Islands

AyeMB found a small island in the ocean north of townbuildthing and started to collect dirt.

Work is done on the Island with many periods of no development.

Slime_tiger are hired to help

AyeMB with the placing of dirt. With new passion injected the project makes swift progress. Vehicles start appearing on the roads of Phoenix City (all made by

More work on buildings and more players creating their own buildings. The metro system development and railway connections is started by

Mystila starts constructing the train station to connect the metro system to the Freedonia Railway System.

Flamehaze97 volunteers to help expand Phoenix Isles with dirt, the job was carried out off and on throughout 2021. Flame later abandoned the project.

Other cities in Freedonia have started building or planning embassies in the city.

Buildings on the northern island are started.

Many companies at Phoenix Isles reference birds in their names.

Not all of the above companies have buildings at Phoenix Isles currently, but several have vehicles around the city. Talk to

Anna_28 if you wish to build a building for one of these companies.

There is a Moon tower, a twilight tower, and a sunrise bakery brand.