The Freedonia Road Co. is an organization that creates roads throughout Freedonia.

The FRC was born from the discord server (join if you want to join FRC: discord invite link) used by the makers of the Great Northwestern Highway. It was formed by

bloo_noodle as the first president because of his love for building roads! He was then kicked out in a coup due to inactivity and

Ranking is based on what the people have done for the organization. Presidents have coordinated major projects, and helped found the company and such. Board members have brought their own projects in to be part of the FRC, or have made major contributions. Workers are the many people who helped build our roads.

The president is responsible for maintaining FRC, and creating alliances, managing, and making executive decisions.

The standard members of the FRC.

Join the discord server, or ask a president or vice president (don't be shy, they are nice and will accept 99% of people)

These are the FRC guidelines:

1. The FRC does not require ownership of roads part of the system, The system is for documenting roads. FRC Does require permissions to the road. Requiring ownership of a road may act as a deterrent for roads who are skeptical of joining the system.

2. The FRC will do its best to maintain its roads in the best way possible

3. We reserve the right to not help any roads made by an active user who doesn't join our work for us.

4. You should provide a route map before making it and every route must have a number and map.

5. Please ask the owner or staff before attempting to connect to roads or to build in sensitive areas of Freedonia. If you don't ask you run risk of being banned or receive a warning by staff for Addition Grief. However, building and improving on existing infrastructure is greatly encouraged.

6. For Project HyperRoute roads: If you build another HyperRoute or connect to the road please research United States roadway signs/roadway formats and use proper signs showing you are building there or how far something is. You'll see examples along the existing HyperRoutes. The roads must be set up the way you drive in the United States. Roads cannot be backwards like the United Kingdom.

7. For Project Glacier, please speak to

snakyman for more info. You will need a Silk Touch Pickaxe for this project.

8. FRC now recommends using the F.U.S.S. signage system, however using your own signage is optional.

9. If you want to help improve FRC roadways please contact

All roadways built by

Flamehaze97 are now Free build, as of July 29, 2022. The minimal requirements with Flame's roads is with the HyperRoute routes to keep an Interstate theme. Flame doesn't mind the style just don't make it look too stupid. Flame also encourages everyone to continue expanding the FRC Road Network. Please speak with

BillionPenny regarding signage and approving roads.

The Southern Freedonia Headquarters in Newport. This is the new HQ and will be the main one.

Fenced off mesa biome with an abundance of Mesa block materials. The Mesa Mines are public and they reside in Chala Kii.

Rest stop island on Great Northwestern Highway. Not sure why this even has a wiki page but yeah

A Headquarters, storage, office, and meeting place of FRC at Phoenix Isles. Planned

Headquarters, storage, office, and meeting place of FRC at Spawn. Project was scrapped and building was deleted by staff in January or February 2021.

See above for more info.

HY_Turkic and was incorporated on March 15th, 2020. It provides Ice Roads to the city of Takadokia. The Ice Roads make it easier to move around the city and have two branches in two parts of the city; the main Ganaz districts of Takadokia and the Takadokian district of Old Loletown.

HY wanted to make a fast travel system for his city, so he took the idea of an ice transport system from New Eden. The Ice Road project began construction in 25th of February and it began from the state of Nea Makedonia with its first stop being in the state of New Azerbaijan. From there, the Ice Road branched out to include all parts of Takadokia and is HY's preferred mode of transport around his city.

Due to the ties between the leaders of FRC and USB, the FRC acts as the road building department for the empire.

Ministery of Road and Bridges

The Ministry of Road and Bridges is a state company of the Union of Kpan Settlements. They decided to work alongside Freedonia Road Co. on road projects. Vice President

Flamehaze97 approved their request to join FRC officially on August 29, 2022 via Telegram.

The FRC's first original project and the fastest way of traveling around without using warps or nexus.

bloo_noodle's highway linking all the Nexus hubs leading all the way to Forrrest. Also known as Nexus Loop Outer.

A highway network in the northwest area of Freedonia. Coordinated by

snakyman and the FRC's first project. See link above for more.

A road leading directly northeast from the Central Nexus towards the Underworld. Not built by Freedonia Road Co. but is maintained by them, and is a connection to several other roads. Having to lead to the Forbidden outpost Route to Forbidden Outpost.

See above for info.

Project Borderlands Infrastructure was established in Fall 2019 by

Flamehaze97 to bring infrastructure and stable means of travel throughout the Southern and Western Borderlands of Freedonia. Several roads were established throughout the project and most of the project was solo'd by Flame herself with very little help. The biggest of projects include Camden Parkway and Project HyperRoute. Flame's Project Cleanup saw signage and lighting come to said roads in March 2020. The project later morphed into Project Renewal.

Project HyperRoute was established by

Flamehaze97 during early 2020 as a faster means of travel for players, connect harder to reach cities, and provide players with nice scenery along the routes. There are 2 HyperRoutes in the Western Borderlands and 3 in the South and Southeast borderlands. The road concept was devised by

Ken_the_Husky. All HyperRoutes have or will have speed beacons at each of their rest stops and highway patrol centers to help players get to destinations quicker. The addition of speed beacons was later scrapped due to massive material requirements. Flame would later work with Ministery of Road and Bridges to finish the speed beacon project.

This loop trail constructed by

ChivalricCode connects the remote regions near Newport. It winds throughout the region. It has extensive terraforming to the sides, bridges, walls, waterfalls, ponds, caves, tunnels, approaches, dirt tracks, passes, side roads, byroads and bypasses. Connects Newport , Project Eros, as well as other builds. The road network serves as a loop road around the region. (Only connect to this trail in a similar style as the local trail or connect a dirt path. Build the connection in the same or higher build quality. Do not make low quality connections. Place a sign that gives me subcontracting permission to alter the connection up to 30 blocks out.)

verydairyman has started a project on November 20,2020 that will help players with elytras equipped have an easier means of travel across Freedonia once the server updates to 1.12.2

Project intended to improve and redesign existing roads built by FRC all across Freedonia, the project is ongoing and indefinite. Please refer to Project Renewal. 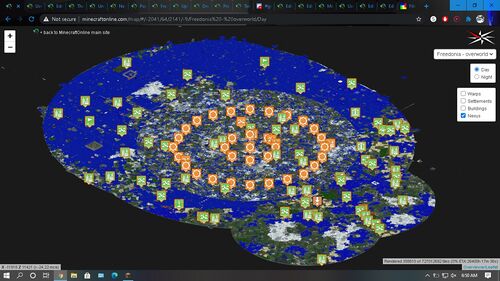 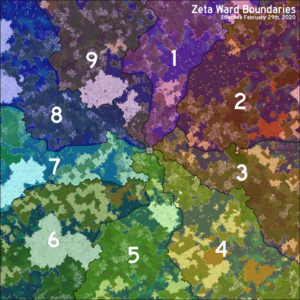