The Maze allows players to test their problem-solving abilities and endurance. 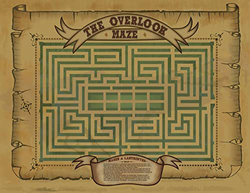 Screenshot of the maze map from the film 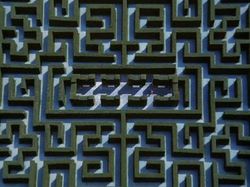 Shot of the tabletop version of the maze in the film 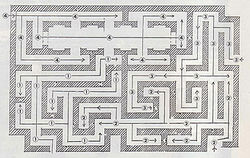 Kubrick's shooting plan for inside the maze 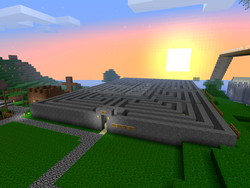 Sunset view of the maze before the addition of the snow

Map view of the maze with snow

Aerial view of the maze

"It recently occurred to me that I hadn't seen any good mazes in SMP yet, so I set out to build one on our server - with a lot of help from Flippeh. And what better maze to build, than the Overlook Hotel's maze from The Shining? It's rectilinear, big enough to be challenging but small enough to be practical. And the walls and paths are equal thicknesses - perfect for a block-based game." -

The maze was conceived early in the history of Freedonia and Minecraft survival multiplayer, as it was felt that the online community lacked quality mazes. Which was strange, since Creative featured mazes heavily. A couple of the three original admins set out to remedy this situation.

The admins built the maze before they had tools such as Cuboid to speed up construction. Instead, it was built entirely by hand.

First, an appropriately sized area was chosen. It was judged to be remote from Spawn at the time and was at the edge of the explored region. The hilly terrain was excavated by hand and levelled to the specified size.

It was felt that avoiding grief at the maze would be impossible (as the construction long predated the grief alert system), so a focus of the design was to make grief obvious and easy to repair. For this reason smoothstone walls were chosen, as it was felt that a griefer (or maze cheater) would be unlikely to accurately replace smoothstone walls, and any modifications in cobble would be easy to spot.

Initially the layout of the walls was plotted in smoothstone, one block tall. The gaps were then filled with sand.

Sand was chosen as griefers or maze cheaters would opt to dig out; Falling sand would highlight where they had done so. A differentiated smoothstone foundation would indicate where the walls were if griefers removed a section of them.

The sand was placed atop a dirt layer, so that would-be tunnelers would quickly dig it up without thinking. They would then fall into the Sauna. 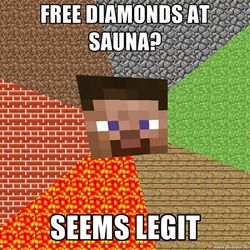 The name Sauna was chosen as a euphemism by

Flippeh. It is a large room floored with two layers of lava, running the full width and length of the maze, placed directly underneath. Players who attempted to tunnel out of the Maze, back when they still could, would take a surprise lava bath.

Later, Sauna became a warp. Players who warp there stand on one block in the middle of the lake. They are safe while they stand still. However, death is the only way out.

As more was learnt about the advanced workings of Notch's server, the maze was write-protected. At the time, chunks were saved as individual files that could be write-protected. A griefer could visit, and indeed destroy it to their heart's content. However, when they left, the server's attempted write would fail. Thus, when the next vistor arrived, the server would load the chunks as they were before.

This "soft" protection scheme was used in many areas of Freedonia, such as UngriefableTower (the proof of concept for this technique), Pyramid and PirateShip.

Unfortunately, migration to the mcregion format broke this simple protection method. Subsequently, Cuboid protected the maze. The admins later used it to prevent players escaping with commands. For added challenge, the protection was extended into the Sauna.

Later as fly mods became more prevalent, a "no fly zone" was created above the maze which prevents both ingress and egress from above.

In February 2013 the protection systems of the maze were modernised. LionsArea replaced the outdated Cuboid and prevents donor commands from working in the maze once more. However, it allowed simpler techniques that Cuboid prevented, such as throwing ender pearls, or using /jumpto to get inside. Thus, the wall height was raised by one block and an iron grating placed across the gaps to prevent cheating.

Nope replaced LionsArea when the server switched to Sponge for the 1.12.2 update.

After a ban, what was once taken from the ground is returned, so that the cycle may begin again.

A triumphant player has collected his reward

From the beginning, the maze was conceived to contain reward chests at the centre. Initially they contained a variety of useful building materials - ladders, torches, and so forth. However, people learnt of the soft protection system (see above), and began systematically harvesting the chests as they regenerated - one notable offender was

Madjock999, for whom a plaque was erected above one of the chests. As a result, the loot was removed.

Once Cuboid started being used, the chests started to have one-off rewards once more. At present, many moderators and admins populate them with items from banned griefers.

As stocking chests with griefer loot grew more prevalent, it became evident that some individuals had memorised the shortest path through the maze, and were systematically clearing out the maze chests.

This was felt to be unsporting, so

SlowRiot took it upon himself to complicate matters somewhat.

Using Craftbook doors, portions of the maze automatically reconfigure themselves based on certain conditions. As a result, it became far more challenging to complete the maze in a predictable and straightforward manner.

It is now rumoured that players must use dark arts to complete the maze, involving either nocturnal rituals or a human sacrifice.

Either that or a minimap mod.

Subsequent to the above mechanisation, and following the new protection scheme in use, it was decided to cover the maze in snow. This was felt to be more in keeping with the original Shining reference.

The snow also hints at the operation of the maze's mechanisation system.

Subsequent to the 1.5 update on 27 April 2011, the new web block was introduced throughout the maze to add a deeper strategy to navigation, aiming to discourage blind blundering or inefficient following of the right-hand rule. However, these were later removed.