Simmuel's Great Road Complex is a massive infrastructure complex spread out across a big chunk of South-East Freedonia. The roads made available by

Simmuel link numerous destinations in the region. Of notable places, the Road Complex links Newlands, Kurai Cho, Forestberg and Nexus SE2 hub. The roads are also included in the central directory of all Freedonian roads, provided by

There are currently five roads as part of the complex:

The Yellow Road is the oldest piece of the Road Complex. It was started in December 2011 by

Simmuel to connect the back then still little town of Newlands to the fast-growing Kurai Cho, which was about to be made a warp. The other closest warp to Newlands was the cobblestone hell called Emucraft, which was very far away. The stone brick road was actually rebuilt once even before reaching Kurai Cho in February 2012, when the railway was added to the road. Over time,

Simmuel also proceeded building his empire along the road, with notable buildings like Vertigo Tower, Simmuel's Mart, Sheep Farm and The Monument. All destinations of the Yellow Road can be found on the directory board, right to the east from the warp of Newlands.

The road between Newlands and the Green Road has been rebuilt a few times, representing further iterations of Simmuel's road design, with the current iteration having a quadruple rail link and protective glass panes. The Yellow Road ends about 400m from Kurai Cho, in a place called Cafe Under Dome, and the road is further continued by

thesprazzzler in style of Kurai Cho, via the magnificent bridge Okina Hashi (finished in 2019, only 8 years after the construction of the Yellow Road began).

After a lengthy discussion with

Simmuel agreed to the replacement of all direction signs to follow the Freedonia Uniform Sign System in order to further improve the quality of service provided by his roads. Yellow Road was given the designation E8.

The construction on the Green Road began in April 2012. Initially, the road went from the eastern end of Newlands to Forestberg. Shortly, the corner bend was replaced with a T-branch to MonopleVille was added on request of

Simmuel was dissatisfied with the lack of possibility to add a rail link to Forestberg due to the need of crossing the entire town of Newlands from his railway station, so in July 2012 the old Green Road was torn down partially, and built from the western end of Yellow Road, going south. This, however, increased the distance from Newlands to MonopleVille significantly, which was compensated by proceeding to create a railway which spans all the way to MonopleVille. In the vicinity of the old T-junction, the Nexus Hub SE1 is located. The entire Green Road has a dual rail link underneath and is protected by glass panes.

As of December 2021, Green Road was given the Freedonia Uniform Sign System designation E9. Note: Route E9 makes use of the Forestberg bypass road, when travelling to Forestberg, make sure to follow the signs for Green Road/Forestberg.

Originally, Red Road was built to connect Newlands with Pyetopia. It was built sometime around 2012, to assist Pyetopia's mayors in making their town more accessible. It was the only road of the Complex not directly linked to other roads, starting in the center of Newlands rather than in Simmuel's domain in the west of the city. In April 2022 it was extended on both ends, to connect the city with the closest Nexus hub in the east, as well as to provide for a better connection with Yellow Road in the west.

Lime Road connects Forestberg with the road leading to nearby Nexus SE2, offering the quickest way in and out of Forestberg. Notable destinations: Forestberg,

Lime Road is the newest part of the Road Complex, which was started in December 2021. Upon his return to Freedonia,

Simmuel noticed that Nexus Hub SE2 was built very close to his beloved Forestberg. In true Simmuel spirit, he immediately started planning a new road and rail link with the Nexus. Using the latest iteration of

Simmuel's road design, it consists of a typical three-meter-wide stone brick road, with wool accents, protective glass panes and lanterns. There is also a double rail link underneath, expanding Forestberg's Metro System (Central Line) southbound, to ensure easy connection with the Nexus Pad. Currently, the road and railroad end at Forestar Inn, some 300m away from the Nexus Pad, requiring following of another public road (NLO) to reach the Nexus Pad itself. This may still be extended.

As of December 2021, Lime Road was given the Freedonia Uniform Sign System designation E13. Note: please change to Route NLO (East) to reach the Nexus Pad at the end of Lime Road/E13.

The planning for Purple Road began in April 2022, when

CaptainIceman for a tour around his town, Mistral Valley. Considering

Simmuel's engagement in providing quality infrastructure for the region, the road was quickly planned. While the link was already accessible in May 2022, the road was fully finished only in September 2022. 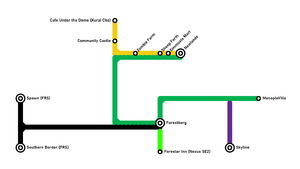 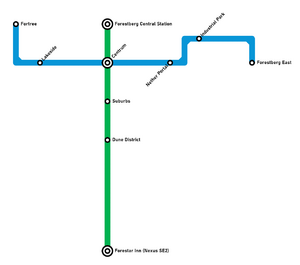 Further, there are six railways as part of the complex: