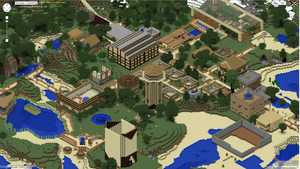 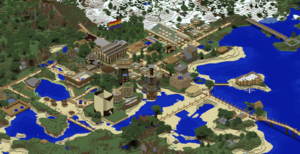 Map view of the town end of December 2021

Simmuel, not far from Newlands and Skyline. It can be found between lovely forested mountains, from which the name originated, and sandy areas, spotted with lakes. The picturesque nature of the town makes it a great retreat for everyone tired of the standard Freedonian big city rush. The town was growing astonishingly fast in the beginning, with some unfinished remnants of the era of rapid growth still visible. The buildings there are mostly made of wood and planks, to make it eco-friendly, and as picturesque as the landscape itself. But that does not mean that Forestberg is a town devoid of modern commodities. It has a modern metro system and an industrial park, which is currently closed due to need for refurbishing.

The town is divided in 5 districts, each with its own distinct purpose and landmarks.

Centrum is the center of the town, and also is oldest part. Most of the buildings located in Centrum are dating all the way back to 2012.

Landmarks in Centrum include:

Lakeside is located to the west from Centrum. It was a result of the mayor's efforts to provide more parks and greenery to the town as part of his 10 Years of Forestberg initiative. A few tall buildings were also erected in the area to provide for a modern skyline.

Landmarks in Lakeside include:

To the south from Centrum lies Dune District, built on the sandy flats by the Bay of Forestberg. It is a true residential district for the common inhabitants of Forestberg.

Landmarks in Dune District include:

Forestberg East is a up-and-coming district in the east of the town. It lies, covered in snow, at the foot of the mountain from which the town's name originates.

Fortree is a district in the far north-west of Forestberg, which originated from and idea from one of the Pokemon games - to build an entire district of tree houses. However, the project never gained traction, with mediocre skills of

Simmuel in building tree houses, and lacking interest of other players to build in the district.

Despite being a relatively small town, Forestberg has its own fully-fledged metro. Totalling 10 stations and two metro lines, it spans across the entire town. The construction of the metro has been ongoing from the early stages of existence of Forestberg. The metro has been completed in March 2022, to commemorate 10th anniversary of Forestberg.

How do I get there?

There are many ways to get to Forestberg:

As of 23rd December 2021, Forestberg can be reached directly from Nexus Hub SE2. The Nexus pad will take you directly to the cozy heart of the town!

There are various different roads with different distances that can be followed to reach Forestberg.

Use Grand Railway Station at Spawn. Buy a ticket for Occidental Line (Green, ticket is seed), and type /st Forestberg. The distance is a mighty 7.5km, but you can see few nice buildings, and are fully protected from all the monsters on the entirety of your trip.

If you are at Skyline, you can reach Forestberg by train.

You may also reach Forestberg by following

tindwcel's road. It goes through many big cities, such as Glenfiddich. 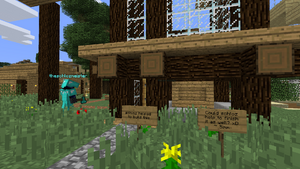 thesprazzzler to finish the house they started a long time ago
Retrieved from ‘https://minecraftonline.com/w/index.php?title=Forestberg&oldid=80516’
Categories: