Soviet Eden, formerly Gay Eden, is a joke settlement made for the purpose of harassing New Eden. 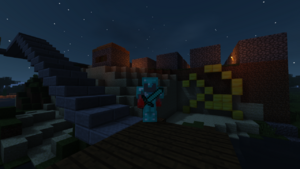 snakyman returns to the fatherland in its new location after he is unbanned.

KingServal came together and decided to make an empire. The empire, called The "Freedonian Imperial Federation," was stated to be a way to combat the perceived dominance of New Eden.

The Federation was split into three branches, with Las Vereno gaining the judicial branch, Snaketown getting the senate, and Socorro getting the military. After this was planed, Snaky and Dairy created a town near New Eden to mock it. Originally called "Gay Eden," in a similar vein to Gayton and Gayetria, it was later renamed Soviet Eden.

They got to work making it, building rows of cobble huts to mock New Eden's housing scheme, along with other Soviet trappings such as a gulag. The server began to notice this town. Although claimed many times by its founders to be "just a joke," their actions ignited a storm of controversy.

FlyingJellyfish logged on and declared snakyman had committed grief relating to Soviet Eden. These three reasons were as follows:

Accessing the wiki, snakyman left responses on why he thought the ban was incorrect.

Snakyman disappeared, claiming internet troubles, and Jelly made the decision to ban him for grief.

Soviet Eden was moved, and the land it inhabited given to New Eden.

snakyman remained banned for roughly five months until he was granted an appeal, where he was unbanned on the condition he would not start any more disputes with New Eden.

These are accounts of people who have interacted with snak and their thoughts on the matter:

A Snakyman Ally Speaks Up

Snakyman was a good friend of mine, we had a lot of fun together during my early days on the server. making highways like Route 69, and founding the Freedonia Road Co.. But I don't know what happened to him. We used to be aggressive, constantly killing and raiding towns. But then I stopped and he continued. And yesterday, it culminated into a massive event. We tried to make an empire to balance power in Freedonia, unknowing what will happen in the next 24 hours. I personally didn't support the idea of a town, I believed it was going too far and that we should just make a small outpost or military base somewhere on the shore. All I can say is that bad decisions were made, and I hope everyone can learn from them and not repeat them.

okay so basically what happened here was a massive misunderstanding, and this page is very messed up but what happened is as follows. me and dairy were joking about new eden having too many citizens, and then we decided to make a joke town to mock them and test minecraft communism, so we chose a spot we thought would not cause any issues. however as we were building it demetri started yelling at us but we thought he was just being annoying due to him not liking me. Eclypto and demetri later came on and seemed ok with it so we continued construction. Apparently they complained to admins too and before i could explain how the 3 instances of grief were unintentional or just not grief, my wifi stopped so i ran over to a local school to use free wifi on discord but it was too late. Please do not edit this paragraph.