A snow covered hill next to one of the wishing wells.

A server Render of Winterthorn.

The central market and Christmas Tree.

A candy cane down one of the streets.

One of the many houses.

Hay bales in a alleyway.

Ingame maps of the city.

Pathway along the east harbour.

Winterthorn is a large medieval themed settlement in a snow covered land surrounded by water on most sides.

The town is also forever celebrating Christmas, with candy canes, snowmen and other decorations that can be seen around the town.

"My favorite place in all of Freedonia" -

Spread around the settlement are tall towers where archers guard over the city. They are also a great way to access the rooftops and see the city from higher up.

The Barracks is where archers are trained before taking up spots in the guard towers. The building itself has four guard towers, one in each corner. Most of the town's weapons are also located here.

One of the small details in Winterthorn, a wishing well where players can toss in a coin and make a wish. Some say half of the town's diamonds are in the bottom of these wells. The entire town is also built mostly on top of lakes, giving the wells a large supply of water.

Center of the city, decorated with a large Christmas tree in the middle of four circular buildings with towers. Inside the center are few market stalls and public chests under more trees where people can leave presents. It often snows greatly in this area of the city, so snowmen are a common sight.

The tallest tower in the city, it rises higher than any guard tower for all to see the time. Under the clock tower is a tunnel coming out of the central market going to Riot Castle and the outer market.

SlowRiot, this castle is mostly towers connected to each other, most of which overlook the outer marketplace.

A much larger market than the central market, this area is where most of the town's stalls and trades are located. Also being right outside the clock tower it allows people to keep track of the time they spend here easily.
In the market area there is also a statue built that looks towards some of the stalls with the north-east forest behind it.

Draglide12, this building sells sweets and chocolates near the outer market.

The east harbour, where the town's fishing ships go out and gather food which to sell at the town market. A boat route is currently being planned to go from Winterthorn's harbour to the nearest warp NewVenice, which will increase the city's trading.

A small fishing ship currently in the harbour, made by

A larger ship used for exploring the nearby waters, planning boat routes and transporting goods from out of the city.

A trading ship delivering goods and resources to Winterthorn.

Stocked with goods from the Emerald Concur's journeys, this is where materials are stored before entering the town markets.

This forest was once cut down to produce the wood used to make most of the town's rooftops and frames. It has been replanted several times as to keep the wood supply up, and to give the city a nice garden area.

The city's simple blacksmith. Very close to the Barracks so they can get a easy supply of weapons and training gear.

Located between the Barracks and Blacksmith so any unwelcome guests can be removed. This is where players enter the town using the Nexus system, they are invited further into the town with bright green and red Christmas colors and decorations.

The west outpost is a small area surrounded by cliffs. The buildings here were the first ones in Winterthorn, and the original center of the town until citizens found the east harbour and decided to build closer to it.

A small house where farmers keep crops and plants inside.
Nexus Portal and tunnel pathway to Iron Reef under the house.

One of the larger buildings in the city, the town hall is located between the north-east forest and the east harbour. It has the biggest inside room in the entire city, and one of the tallest roofs. In here important citizens of the city discuss future plans and have large dinners with the finest fish from the harbour.

The oldest tavern in town, tucked away at the very south tip of the city. It serves a variety of food and drinks and is frequented by many residents. Outside is a small memorial to the moderator Witchy1000 who built the tavern and sadly passed away in 2021.

This lighthouse is a shining beacon for any ships coming in from the north. It is currently maintained and inhabited by the Lightkeeper

Constructed at the tail end of 2019, this stage would go on to be used during the Evergreen concert. In the days since, it has become publicly accessible for residents to use.

This frozen lake is a popular spot for ice skaters. It has decorations hanging above and a toolshed over to the side. While not the official owner, it is colloquially known as "Jessica's Lake" as it's located directly west of Jessica's Cafe. A small Tridge also overlooks the lake and is a popular spot to watch from.

Run by the old-timer Jessica, her Cafe has a long history in Winterthorn and is a partner of the Western Waters Shipping Co.

This apartment complex is located in the northeast corner of Winterthorn and tincludes four units.

ScarClaw72 makes animations featuring Winterthorn annually in his Merry Christmas Freedonia series. Every year they alternate between focusing on overarching storylines, and the players of Freedonia. 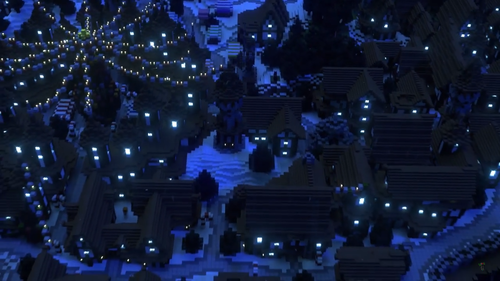