Batugus is a rural village on a group of artificial floating islands, located between Pokethedral, Schloss Katzenstein, and the Guitar. Its architecture is characterized by lovingly crafted timber frame constructions with wooden roofs.

"You don't want to get to batugus. Only death awaits you there" -

On Batugus you will see some friendly zombies, they look after the islands and will not harm players. There are many zombies on the islands:

A little accident that caused a giant sphere of dirt to be created at Batugus. Encasing many islands in dirt.

Cleaning up the last of the Dirt Star with a big game of spleef using enchanted shovels.

ScarClaw72 made a video exploring Batugus in his series. The video can be found here 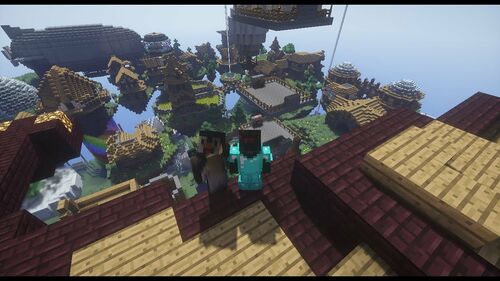