From MinecraftOnline
(Redirected from NewVenice)
Jump to navigation Jump to search

New Venice is a once-prosperous Warp in western Freedonia. Founded by

crystalriver, with help from her brother

thesprazzzler, it became well-known due of her enthusiasm, her strong team of helpers and the settlement's interesting architectural style. 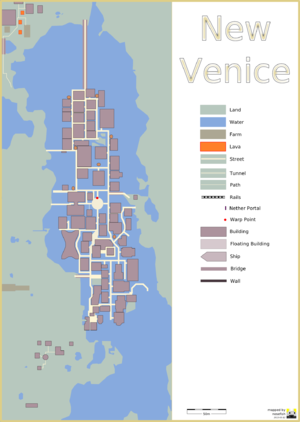 New Venice was founded after

crystalriver decided she wanted to start a town of her own. She liked the idea of building a Venetian town. After many hours of venturing around she found the perfect lagoon. With the help of her brother

thesprazzzler, she set to work in singleplayer creating the style for a basic house in her town, then built the prototype in multiplayer.

The first building she built was the visitor centre. She then set out to expand her town, inviting many players like

Ted1246 to build houses. Soon after, she built herself a house, realising she didn't actually have one other than the visitor centre! Then more people came like

crystalriver a lot around this stage.

A Mayor is Born!

Because of all his help with the town, Aeginus became the Mayor of the town. Then he built his own house, opposite crystalriver's. He has helped mainly with the spleef arena, the boathouse, some of the underground and the general layout of the town.

New Venice has a board consisting of:

New Venice is allied with Cloud City. The two cities have agreed never to go at war with each other, and the Cloud City Military has promised to defend New Venice, and to never attack it, or it's residents.