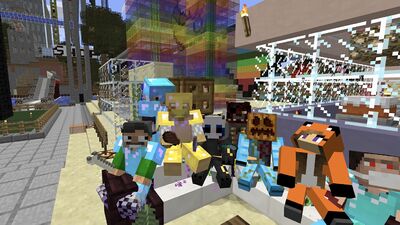 Group Photo at Spawn taken by 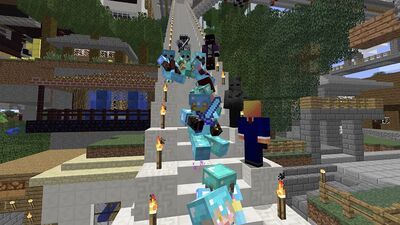 Vibing on the Quartz Stairs at Spawn 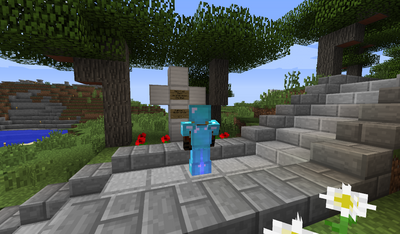 A builder and true survival player,

TheGriffinLord is generally a nice guy who would, more often than not, choose peace over warfare; but occasionally he will participate in PvP for the fun of it. If you see him in Freedonia, he will most likely be collecting materials for a build, exploring new parts of the server, or asking people if they would donate their head to his collection.

Griffin was promoted to Moderator on February 6, 2021, along with his fellow players

yourshadowdr, all three of which he believes were deserving of the promotion. Griffin had a bit of a heads up from staff that he was going to be promoted eventually, but it still was a pleasant surprise when it happened.

During the Holidonia event, Griffin stayed by himself and did not join any factions. Instead, he headed far out on the negative x-axis and set up a small camp for himself to fish and grow sugar cane. The first player he met was

Krenath, who was in the Nether mining for quartz. They exchanged a somewhat cautious greeting before Krenath, whose killaura happened to be on, accidentally attacked several zombie piglins. Seeing a chance to kill the supergod donor, Griffin took it and slew Krenath.

Several days later, Griffin came online and found his dogs killed, nether portal trapped, and enchantment table stolen. So he packed up and went farther along the x-axis where he found an untouched village. After recruiting a few librarians and a blacksmith, he began grinding for good gear in expectation of eventually returning to spawn. He was able to get good enchantments for three armor pieces, upgraded two of which to netherite, and also made a sharpness 5 axe called "Griffin's Banhammer." However, he never used them and on the day before the return of Freedonia, he disposed of his entire inventory, ate one of his notch apples, and fell to his death as a symbol of the quick and fatal ending to Holidonia.

Griffin was only one of two players during Holidonia to possess an elytra because the limited world border of Holidonia prevented players from reaching the outer end islands. The first player was Krenath whose elytra Griffin had taken after their battle.

When Eclypto found a tiny slime in spawn.

An encounter with the Chaosweaver.

Netrom5 in chat while he was on his alt when

Griffin and Deme somehow ended up in a plant pun battle in chat.