Crown's Landing is an independent city, with its own political system and international relations. The city is ruled by its two founders,

Imperial_Crise, with the assistance of the Crown's Council. The city is aiming to spread and welcomes new inhabitants, whom may be attributed plots by Members of the Crown's Council or the founders after an initial screening. The building quality is enforced to a reasonable level within the city, and there are minimum requirements for building.

Despite being a relatively new city, Crown's Landing has frequently been among the most active locations in Freedonia, and enjoys regular surges in popularity as it remained an active and growing city for more than a year. We try to offer as much as possible to our residents through public infrastructure and frequent events. Our aim is to create a true community and to thrive together. 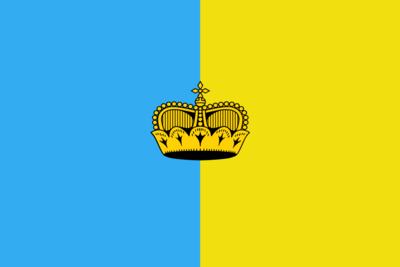 Flag of Crown's Landing, designed by

Crown's Landing is located in the Southeastern part of the map, relatively far from spawn. It is one of the biggest cities in the area and acts as a nexus hub for many nearby settlements. The nearest warp to Crown's Landing is NovumCulta.

The city itself is split into multiple districts: Old Crown's Landing, West Bank, The Guillotine District, Castle District and Nova Cartago. Some districts are still completely managed by the Crown's Council while others have their own municipalities. Here is a map of the districts: 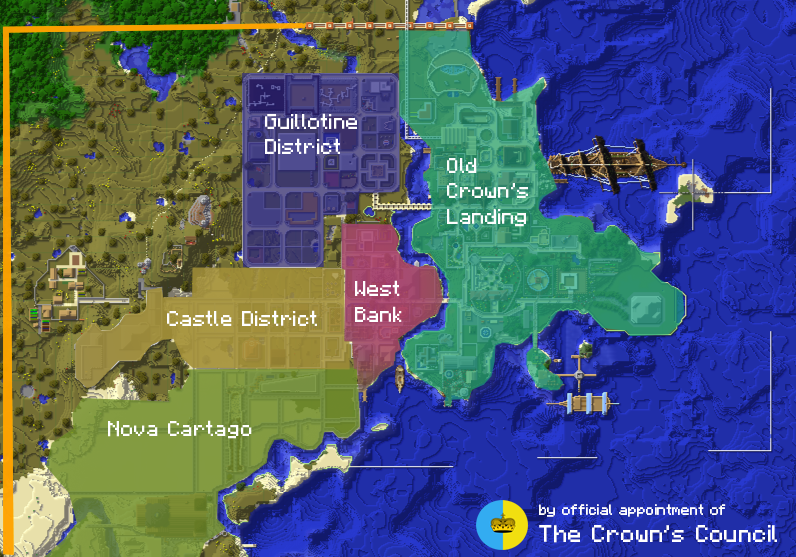 Old Crown's Landing is the oldest district in Crown's Landing and constitutes the first area ever built in the city. Most of the district was built in early 2019 and the area has been relatively stagnant ever since. It does have a certain historic value and plots are very hard to obtain in this area. The founders of the city have their primary residences in this district, and you will also find the homes of many older residents who are now part of the Crown's Council.

The West Bank is located at the other side of the main river that crosses Crown's Landing. While you will find some older builds in the district, its recent expansion led to many seaside villas to be built in the district, as well as more luxurious homes and hotels. The district is very well located with great views over nearly every other district and the ocean. It is a very residential district with little public builds and landmarks to be found in it.

The Castle District is the area between King's Castle and the West Bank. The district does not really follow a specific style as it had to rapidly expand to accommodate wave of new players that came with the the two wave of popularity that city has seen. Castle District is the home of many newer players, with plots being relatively small and dense. It is a great starting area for new residents due to its flexibility when it comes to building style.

The Guillotine District is the urban centre of Crown's Landing, home to city buildings and skyscrapers. It aims to become the host of multiple business, such as casinos, restaurants and banks and offers affordable rental options for business owners. The district is among the newer areas of the city and is strict in its building style. All the builds have to be pre-approved to fit the landscape. The name of the district was chosen to honour the guillotine that previously existed in the district and that was destroyed. The district was mostly built by

Freskooo. The building style is strictly enforced, with new players not being able to obtain plots but rather being prompted to buy existing property. The district is home to the Crown's Landing station, an award-winning landmark, as well as a Cathedral and the future museum. It is located in the desert area of Crown's Landing.

District staff and residents are encouraged to edit these descriptions to best capture what their districts are like!

There are multiple ways to get to Crown's Landing, the most common are by far the nexus and the nether. Our nexus is located in the Nexus Yellow 2 hub, and our nether ice highway is connected to the NovumCulta nether portal, serving as a secondary way to get to the city is the nexus is ever unavailable.

These rules are not exhaustive and you'll have to use your common sense. Please don't do anything that may affect someone else in a negative way. If you have any project or ideas, feel free to contact

Imperial_Crise via /msg or /mail!

The Diamond Rule Sign (which every resident has read and agreed to follow) also states that the founders have the right to modify any infrastructure in the city and invite/kick residents at their own discretion.

[Important] Every resident in the city (meaning every owner of a plot, apartment, or any land within the/affiliated with the city) has to follow these rules. If the rules are not followed, a trial can be held and may result in punitive measures. Since the rules are not exhaustive, any misbehaviour can be determined as unlawful by an impartial jury. Please note that under extreme circumstances, Crown's Landing has the right to kick a resident definitively and re-attribute his plot/land. This will result in the resident being removed the permission to build in his plot(s) (which are the property of the city, as part of its land). They will typically be given time to collect anything they may need and to clear their plot. Precedent has been set for these powers to be applied with admins agreeing to evictions in the past and recognizing the founders' right to manage builds.

Vryam - The entire city and islands

doublehelix457 - Plot: One of the First Towers

Crown's Landing does not function as a democracy. The founders have complete, unconditional and undivided power over the city, but they choose to appoint counsellors to help them, constituting the Crown's Council. The different titles that exist can be summarized as follows:

Founder: Complete power over the city, its staff and residents and even its constitution, rules etc., both founders have equal unilateral power, meaning that they do not require consensus to take decisions (but will often chose to consult each other)

Counsellor: The Crown's Council is like the staff of the city. Each counsellor is usually assigned specific tasks and responsibilities with associated rights depending on their area of expertise (eg. head of builds, diplomat). They are often called to vote or discuss important matters. They can be appointed (or fired) by any of the two founders.

Crown's Landing also has some Honorary Titles that can be given to residents who have contibuted significantly to the city. These roles have no official duties but might come with some preferential treatment.

Lord: A Lord of Crown's Landing is directly appointed by one of the founders. This is a very rare distinction that is only given to players who have built numerous monuments in the city, own vast land and have consistently been involved with the city over a long period of time. Lords can modify their titles to become Lords of their specific land or district (eg. Lord Vryam of Castle District). Lords will often be fast-tracked when requesting new plots and getting projects approved.

Viceroy: A Viceroy is an official who runs a city or settlement in the name of Crown's Landing. The territories they rule are part of Crown's Landing and constitute the Crown's Dominion. They have considerable freedom in how they choose to rule their territory but their allegiance rests with Crown's Landing.

Crown's Landing is in alliance with:
- NHCity : A big power of Freedonia
- New Eden : Economic alliance with big projects for the future! ;)
- The Republic of Verico : State officials shared between the two cities, Bedrocco embassy in CL

The diplomatic team of the Crown's Council has launched an embassy programme under which cities can apply to obtain a Crown's Landing embassy that follows streamlined guidelines that can be found in this brief: EMBASSY BRIEF 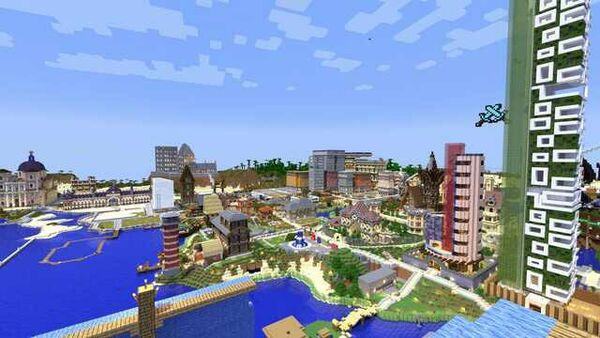 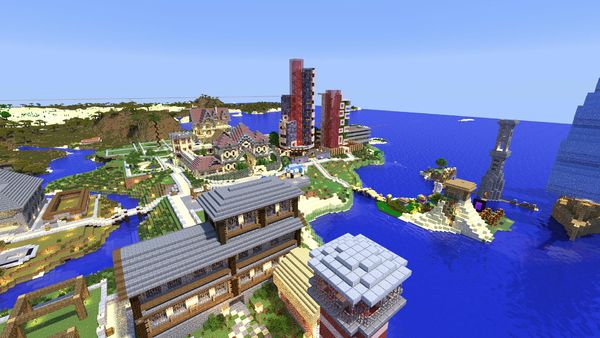 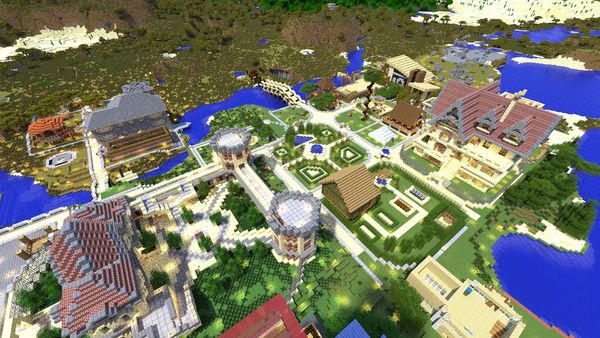 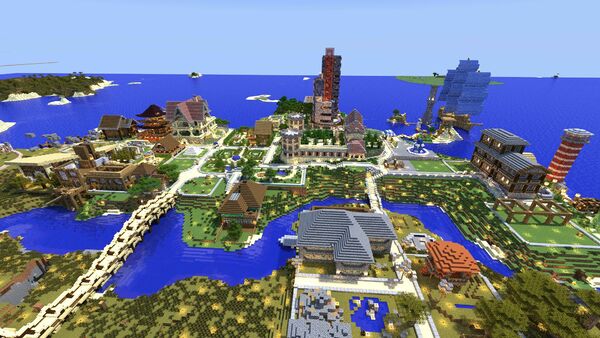 ScarClaw72 featured the city in his 21st episode of Exploring Freedonia, as part of its second season. 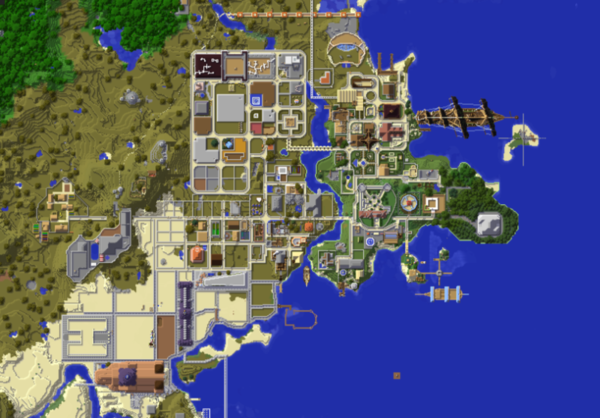 On May 4th 2019, A conflict Broke up though The Town, It all Started like This,

Vryam was peacefully on the twin towers building finishing the roof of the build, by unknown reasons Vryam started shooting his fellow citizens from down below.

TheGolum. The Player stormed up the ladder to discover it was covered by Lava!, the war began slowly going away and all the players did a sigh of relief... the players put the Event behind them and moved on. Map Link: http://minecraftonline.com/map/#/6225/64/10475/-1/Freedonia%20-%20overworld/Day 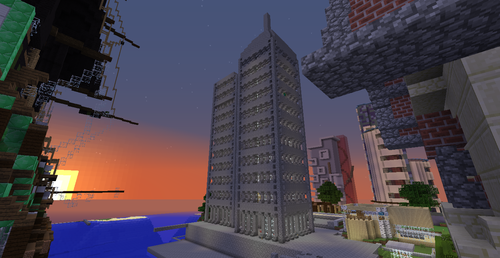 On May 17th 2019, Minecraft's 10 year anniversary. Crown's Landing saw the largest amount of players at one time in it's history of being active (6, 7 or 8}. And for a random reason

LudicrousLogan made a long bench thing and a dick.

TheGolum made a "Tower Thingy". And others took part as well.

The Bushes were removed by 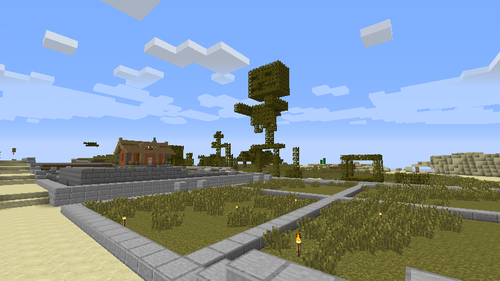 The Great Battleship is one of

Imperial_Crise's only and greatest builds.
He built the city with the help of others, but the ship is his own personal project.

The Conspiracy is that it is rumoured that the founder, upon completing his masterpiece, will quit the server. As he let

Raflamar of his plans. And after bring up the subject of who will lead the city,

Imperial_Crise decided that, upon the ships completion. He would declare an heir out of the members of the Crown's Council:

Raflamar where the current members at the time. Where he would choose one of them to take his place as Leader of Crown's Landing, alongside

Vryam. Nothing else has been confirmed at the moment.